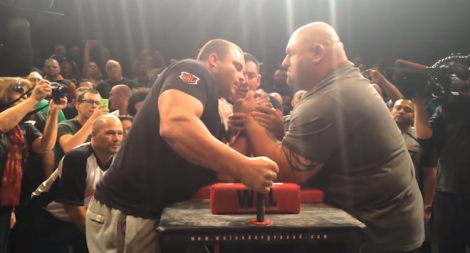 Oh hey, did you know that the World Armwrestling League Championship was on ESPN last night? Yeah, I didn’t think you knew. Well, now you know, because yes it was on. Here’s another interesting fact: The League brands itself “the oldest sport in the world.” I would have imagined that some other sport — like wrestling, for instance — would be a contender for world’s oldest, but who knows? I’m not a historian. I’m also not sure armwrestling counts as a “sport,” but again, who knows? I’m not a linguist.

I watched a little bit of this World Armwrestling League Championship (so I guess who’s the sucker now?), which apparently, according to the play-by-play announcer (who I assume is getting paid to do that job) has “nationwide events.” And I have even better news for you: Even if you are not an armwrestling pro (which, apparently, also is a thing) — even if you are an amateur, that is — you are welcome to register to compete for an ultimate prize of $500,000.

I saw two guys on ESPN win $10,000 each, and they did it in less than 10 seconds. They did it in an armwrestling challenge. So that is how I know I am failing at life, or at least it’s how I know I am not reaching my full potential of shamelessness. Because what the World Armwrestling League Championship tells me is that you can’t keep people with no shame down. These guys are not ashamed to be armwrestling pros (or maybe even amateurs!); they aren’t ashamed to literally have that factlet about them broadcast on television. And you might think the guy doing the play-by-play would be embarrassed, too; I can’t say for sure what his level of embarrassment is, because of course I don’t know him, but I know he’s not embarrassed enough to turn down the money he’s earning for this job.

As we move closer to June and Father’s Day, I salute these men, these heroes of armwrestling fame. These men are an inspiration to me. They have not let shame keep them from following their dreams. They are living life, and they are the real winners.

Most Recent Articles:
♦ Sorry, Healthcare Professionals, Computers are Coming for Your Jobs Too
♦ Viral Video of the Week: Try this Next Time You Find Yourself So Close to a Bear That You are Almost Kissing It
♦ Attention Accountants: The Clinton Foundation Wants You!
♦ An Interview with Forlorn Strangers
♦ Viral Video of the Week: Some High-Powered Exec Approved This Velveeta Commercial, Is An Idiot