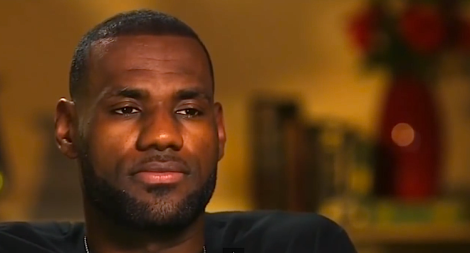 After Little Utopia’s managing editor Laura Creel wrote a piece on The Kroll Show, I have to admit that my wife and I watched “Publizity” sketches for a good hour on YouTube. And now that it is in my consciousness, I can’t help but think how funny it would be if someone made the same sort of sketch comedy on the life and times of LeBron James.

OK, maybe I’m a bitter Miami fan, but that doesn’t mean I am wrong. I won’t even get into “The Decision,” which benefited my team even though almost everyone universally agrees that it was out of control (I say “almost” because some people still want to hold to the “he donated a bunch of money to charity bit”). What I will get into — and a major part to why I think James would make a great subject for a sketch comedy series — is what has taken place since James left the Miami Heat.

During the offseason, James decided to opt out of his contract. It didn’t seem like that big of a deal at the time because Dwyane Wade and Chris Bosh also opted out of their contracts. In the early stages, it was simply assumed that they would all be back with the Heat.

As you know, however, most of Miami was stunned when LeBron got Lee Jenkins of Sports Illustrated to pen a personal essay that detailed his departure home, and even spun the narrative to be a bit Messiah-like. Think I’m exaggerating? Watch this:

In the essay, James stated how hard the decision was for him and how this new venture would “take some time.” When the essay came out, the Cleveland Cavaliers’ roster featured the number one overall pick in Andrew Wiggins, a budding star in Kyrie Irving, and some very capable role players like Dion Waiters, Anderson Verajao, and Tristan Thompson. (Now, the only one of those players who still remains on the team is Kyrie Irving.)

Cleveland was then able to bring in Kevin Love, who had never made the playoffs before, and was also able to score Mike Miller, Shawn Marion, Iman Shumpert, Timofey Mozgov, and J.R. Smith. It’s pretty clear that this team was not planning for a few seasons down the road; the Cavaliers wanted a championship now. And that’s fine, as long as we can all agree that the essay was a bit disingenuous.

Here’s where the fun really starts, though. Just picture what someone like Dave Chappelle or Nick Kroll could do with these scenarios. During the middle of this past season, there was the Christmas fiasco of 2014, when James allegedly told Wade that if the experiment in Cleveland didn’t work out, he would be coming back to Miami to do something special.

As the season began to wind down, it was reported that James had become frustrated with Love. In many ways, the feeling seemed mutual. Love, a player who averaged  26 points and 12 rebounds per game last season, has made repeated attempts to reject his new role on the team. He has asked for more inside touches. He has stated that he isn’t a stretch four. And he has also said that James and him aren’t best friends. Of course, a lot of this could have been avoided if James had just came out and supported his teammate in the kind of way that might be constructive, right?

Instead, what he did was try to “make it work” by publicly questioning his confidence, by tweeting for him to fit in, and by staying virtually silent on the subject. Meanwhile, head coach David Blatt has publicly stated that Love is not a max player.

If James isn’t a person that deserves a sketch comedy show, then I don’t know who is.

But maybe I am a bitter Miami fan.

Previously from Christopher Cruz:
♦ The Blue Devil is in the Details: How Two Blown Calls Ruined the NCAA National Championship Game
♦ “Togetherness” Goes Astray on the Spirituality Question
♦ What a Long, Strange Trip It’s Been: The Career of Adam Sandler
♦ Will Derrick Rose Ever Return to MVP Form?
♦ The Heat is On: Miami Acquires Goran Dragic