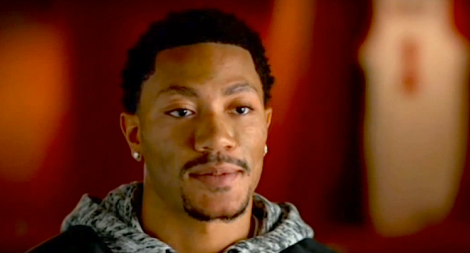 After Derrick Rose won the MVP award in the 2010-2011 season, averaging 25 points and 7.7 assists per game, his ceiling seemed limitless. Rose had the potential to go down as one of the best players of all time.

Unfortunately, potential is not enough.

Potential is the thing that I had when I was in high school, and I didn’t play football. Sure, I could’ve been a star linebacker; I was fast, agile, and strong. But, since I never played, it was only a possibility that was never realized.

At Rose’s brief peak, his athleticism was unmatched in the NBA. The things that he could do in the air even gave LeBron James a run for his money (pardon me if I seem a little bit bitter still). The Chicago Bulls won 61 games that 2010-2011 season, and Rose was only 22 years old (which in the NBA is basically an adolescent). Everything was in front of him.

But then his first major injury happened, and it seems as though that injury never really ended. The Rose who nearly banged his head on the rim when he dunked on Goran Dragic is clearly not the same Rose we’ve seen the past few years.

For a few games this season, he broke out and seemed like the MVP of 2010. But, as you’ve heard by now, Rose underwent a meniscectomy on the medial meniscus tear in his right knee last week. He will miss four to six weeks of the season, and this will now be the third of his seven years in the NBA that he has gone down with an injury.

Remember Grant Hill? He was the player that was supposed to challenge Michael Jordan for the basketball throne. He teamed up with Tracy McGrady on the Orlando Magic but was never able to move past his injury to his ankle. The same was true of Penny Hardaway. These men were never able to reach their potential.

Although Chicago is remaining optimistic about the prospect of Rose’s return, you have to think that optimism is dwindling pretty quickly. Half of his career Rose has either played injured, or he’s been on the bench in a suit. Chicago can’t continue to rest future hopes on a player that will never get back to MVP form. There was a time when Rose’s incredible play meant that Chicago basketball was back after Jordan left in 1998.

Previously from Christopher Cruz:
♦ The Heat is On: Miami Acquires Goran Dragic
♦ Why I’d Prefer Harper Lee Not Publish Again
♦ Why I am Drawn to “Togetherness”
♦ The Deflated (But Not Yet Defeated) New England Patriots
♦ Why Our Choices Matter

One response to “Will Derrick Rose Ever Return to MVP Form?”