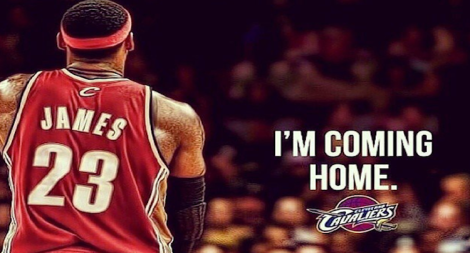 Remember when LeBron James’ PR team wrote The Letter announcing the King’s return to Cleveland? And remember how his PR team threw in that line at the end — the one about how Northern Ohioans are striving and hard-working and grim and strong and how they never give up and never back down and never blah blah blah. You remember — this gem: “Our community, which has struggled so much, needs all the talent it can get. In Northeast Ohio, nothing is given. Everything is earned. You work for what you have.”

It’s a good one, right? And it fits in with the narrative that James is creating about himself. The plot pattern that LeBron and his PR team have crafted — the one where the hero leaves home only to return triumphantly— that pattern is so common in literature that it was identified by Joseph Campbell as monomyth, or the universal plot from which most stories and myths stem. So what LeBron’s PR team has done in their writing, and what LeBron has done in his own life is, for the most part, to tell a story that we’ve all heard before.

Apparently, we all like a good story and we like our stories to read the same as every other story we’ve ever heard. So, thanks for that, LeBron/LeBron’s PR team. Neither the monomyth in theory nor the way the monomyth played out in real life — with the world’s best basketball player leaving my home team and all — anger me nearly as much as the actual language that The Letter uses in referring to the People of Northern Ohio. LeBron/LeBron’s PR team glorifies the people of Northern Ohio, casting them as the carriers of the American Dream, the ones who work hard for everything they get. No handouts for Ohioans.

As someone from Miami, here is what I say in response: In Miami, nothing is given. Everything is earned. You and your immigrant family work for what you have and work for things you will never get. You will be exiled from your home, and you will come to a new home that is not a home at all. You will be forced to clean houses or work in factories or in tomato fields. And in Miami — a city of exiles, a city of immigrants — we know too well that nothing is given and that everything is earned.

I have nothing to say against Northern Ohio; I only take umbrage to the sentiment expressed in The Letter that somehow, Northern Ohio is tough and grim like an old Clint Eastwood, the sentiment that singles out that region for romanticizing. Because really, Miami has struggled so much, and to Miami nothing is given. The Miami that I know — the one with a grandfather whose fingers were cut off in one of his three factory jobs, the one with seven people living in a two-bedroom house — that Miami works for what it has just as much as Northern Ohio does. And we can’t even get a damn thank you from LeBron, or from his PR team.

One response to “In Miami, Nothing is Given: A Response to LeBron James’ PR Team”