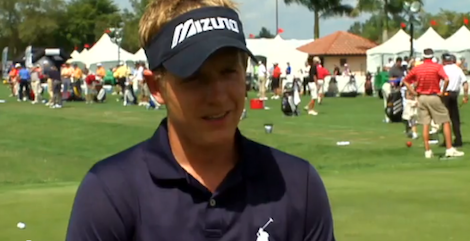 OK, you probably don’t know who Luke Donald is. In order to catch you up on things, let me give you the three most important things about him:

How did he win a cow? I’m happy you asked.

Last November, Donald won the Dunlop Phoenix tournament in Miyazaki, Japan and along with a check and trophy, Donald was awarded a cow. Now this isn’t just any cow. Miyazaki has a breed of cow with similar qualities to the ones found in the famed Kobe beef. The cows are said to drink beer and get massaged with sake. In another life I hope to return as a Miyazaki cow.

While most winners of the tournament sell the cow back on the spot for cash, your boy Donald is no fool. He took the cow. Unfortunately, Donald was informed that there was no way they could transport the entire cow back to the U.S. Donald wasn’t hearing that nonsense, though. When a man wins a cow, he wins a cow.

After a series of phone calls, emails and negotiations, a deal was reached. While Donald didn’t receive the entire cow, he did get a package delivered from Japan of the specific cuts that he had requested. Not only was it “the best beef [he] ever had” as Donald told ESPN.com, but the package was also worth $80,000.

You know what? Forget coming back as a cow. I want to come back as Luke Donald.

One response to “Luke Donald Won … a Cow?”