When you think of flying on a plane (unless you frequently fly first class, and if so, please consider sponsoring Little Utopia), what is the first thing that comes to mind? Cramped seats? Stale air? Screaming babies? Getting stuck next to that random person who really needs to talk to you and may or may not end up drooling on you after he falls asleep on your shoulder?

Back in the day you might’ve been offered some undercooked chicken, overcooked beef or some sinister-looking fish. And let’s be real here, you only picked the fish if you were a masochist. If you’re “lucky” enough to be offered food these days, it’s probably a turkey sandwich with day-old lettuce and a soggy tomato on it. On shorter flights, you’ve moved into the tiniest-bag-of-pretzels/peanuts-you’ve-ever-seen territory.

And if you’re flying Spirit… HAHAHAHAHAHA. Good luck with that, buddy. Don’t be fooled, friend: There is a great deal of sadness in that laughter. I fly Spirit often. 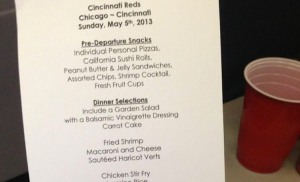 That fact made it even worse when I came across a picture posted on Twitter by Dallas Latos, wife of Cincinnati Reds’ pitcher Mat Latos. In the picture, which you can see to your left (to see the full picture click here), Mrs. Latos holds the Reds’ in-flight menu.

As you can see, dear reader, the menu is divided up into FOUR sections. And wait… what’s that under macaroni and cheese (mmmmm mac and cheese)? Sautéed haricot verts? They’re importing green beans from France for this flight?!

And if snooty imported vegetables aren’t enough, there is desert-on-desert action going on in this menu. You didn’t notice? All the dinners are served with carrot cake and then you can still have snacks like ice cream sandwiches, caramel popcorn and assorted candy bars. Maybe that’s why so many baseball players look like this and this. It’s the desert-on-desert-on-desert on the planes!

But I guess a group of professional athletes needs a lot of food for a cross country flight. They leave straight from the locker room to hop on a plane and never get a chance for dinner. The Reds are probably flying out to San Francisco and will need options for a four-hour flight.

Wait… what’s that? This flight is to Chicago? How long is that flight?

Now, I suppose I could turn this into a critical article (that would probably become a rant) on how this type of treatment explains the entitlement and the arrogance exhibited by certain athletes, or how ridiculous it is to treat millionaire athletes this way when teachers and police officers are so underpaid. But I can’t. I want that menu whenever I fly.

One response to “In-Flight Menu Madness”