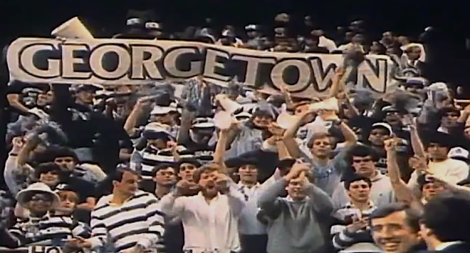 Georgetown fans at the 1982 NCAA tournament (Screen shot from https://youtu.be/1EBxGaeTrw0)

[Editor’s Note: This is the first in a two-part feature by Evan Wix in celebration of March Madness. Visit Little Utopia this coming Monday for the second half.]

Patrick Ewing was otherworldly, a modern-day giant with arms that dangled like tree branches, legs so long that his knee pads looked like tiny specks, and an ever-present t-shirt under his Georgetown jersey. I was introduced to him by way of my first issue of Sports Illustrated, the 1982 college basketball preview that featured Ewing on the cover with an even bigger giant, Ralph Sampson of Virginia.

Georgetown was a force, not only with their dominant play on the court, but with the specter of head coach John Thompson, another man of giant proportions, stalking the sideline and glowering menacingly with a towel slung over his shoulder. When his team matched up against Dean Smith and the University of North Carolina Tar Heels in the 1982 NCAA Men’s Basketball National Championship game, little did I know that it would alter the course of basketball and rocket a snot-nosed seven-year-old kid from the Deep South into the netherworld of basketball fanaticism.

The men’s NCAA basketball tournament is an event that dominates the sports landscape each March. Beginning with the conference championship tournaments, the manic desperation of teams fighting to delay the end of their season produces a seemingly endless deluge of breathtaking finales. Never has there been a more apt moniker than “March Madness.” As college sports have become big business and the blue-blood programs continue to dominate and attract the best coaches and players, the poetic notion of the underdog still captivates the imagination. This drives even the fringe sports fan to enter bracket challenges and shirk daytime responsibilities; it drives them to glue themselves to screens to imbibe the excitement of the early rounds.

I developed an early love affair with college basketball courtesy of my father, who was a four-year basketball letterman at the University of Georgia in the late 60s. As the stories go, my dad was an athletic 6’7” hybrid who could play almost any position on the floor, gifted with soft touch and a leaping ability that allowed him to also letter as a high jumper on the UGA Track and Field team (he claims he could stack two balls on top of each other and dunk them through, Dr. J-style).

I was regaled by his tales of beatings at the hands of the legendary Kentucky teams of that era, which were coached by Adolph Rupp and featured a guy named Pat Riley, and firsthand accounts of the wizardry of “Pistol” Pete Maravich of LSU. According to the legend, Maravich let fly a half-court hook shot and walked over to the bench to sit down just as the ball descended through the hoop. He was then carried off the court by turncoat UGA fans. Obviously, this legend lives in the realm of tall tales, but the one constant in every telling has always been that my dad’s “defense” “held” Maravich to 42 points (his college career average was 44.2). For as long as I can remember, this has been his go-to conversation ice breaker.

In the midst of my developing basketball obsession in 1982, I accompanied my dad to my first UGA alumni reunion game and was mesmerized by the unbelievable athletic exploits of a forward named Dominque Wilkins, who immediately became my favorite player from that moment on. I went on to play basketball in a youth league where I developed into a scorer (read: ball hog), alternating between the number 21 (‘Nique’s number) and 33 (Ewing’s number), all while rocking a t-shirt under my jersey. Once I hit middle school we moved up to 10-foot baskets, and my offensive prowess mysteriously disappeared. By high school my growth leveled off at several inches shorter than my dad, and I ended my career as a “high motor” bench warmer on the varsity team, seeing only spot duty and garbage time at the end of games.

Georgia is traditionally a middle-of-the-pack SEC team, and although they made a run to the NIT Final Four in 1982, I was more focused on the NCAA tournament because of my affinity for Ewing’s Georgetown. The North Carolina squad they faced in that historic final was stacked with future NBA stars and Hall of Famers, including center Sam Perkins, forward James Worthy, and a freshman guard by the name of Michael Jordan. Ewing was dominant, swatting shots on defense (he registered several goaltending calls) and scoring at will on the offensive end, but the game went back and forth, which set up a finish for the ages.

After Wilkins left a year early to enter the NBA draft, eventually landing with the hometown Atlanta Hawks, the 1983 UGA basketball team went on an incredible run, winning the SEC tournament championship and defeating the Jordan-led Tar Heels in the NCAA East regional final to qualify for the only Final Four appearance in school history. The 1983 event, held in Albuquerque, New Mexico, produced what is widely regarded as the most epic in tournament history (epic is an adjective thrown about incessantly when describing the magic of the madness). My beloved Bulldogs were pitted in a “Cinderella” matchup against an upstart North Carolina State team, led by Coach Jim Valvano. Unfortunately, Georgia’s carriage became a pumpkin as North Carolina State won 67-60 to advance to the championship game, where Goliath was waiting.

The other Final Four game featured two of the titans of that era, the Houston Cougars, featuring Akeem (later Hakeem) Olajuwon and Clyde Drexler, who anchored a team nicknamed “Phi Slamma Jamma.” The Cougars were pitted against the similarly gravity-defying Louisville Cardinals, known as “The Doctors of Dunk.”

The semifinal was considered the de facto national championship game, with the expectation being that either would easily dispose of the Bulldogs or Wolfpack. In a fast paced up-and-down game, both teams struggled to adapt to the high altitude, and several players were forced to the bench to take oxygen. However, Houston eventually pulled away for the win. The game featured multiple dunk highlights, which gave it the feel of a 90s-style And1 mixtape, with the most breathtaking being Clyde Drexler’s ridiculous double pump finish off a fast break caused by a steal.

In the championship game though, North Carolina State would shock the Cougars on a last-second dunk, which produced the iconic image of Jim Valvano scrambling around the court deliriously searching for somebody to celebrate with.

There have been so many transcendent moments during the history of the tournament that even the most embittered and cynical of fans (yours truly included) get a reminder of what it was that drove us to fall in love with the theatrics of sports. The 24-hour media cycle meets its match, as professional hot take-giving talking heads struggle to provide analysis for unknown players and coaches, and as schools such as Valparaiso or Florida Gulf Coast become forever etched into the sports lexicon.

Since it’s a sudden death tournament, unheralded squads can seemingly click overnight, get hot, and go on a run. Some coaches, like Tom Izzo of Michigan State, take squads that struggled during the regular season and magically whip them into shape for a deep run in the tournament (see this year’s run to the Final Four). Every year brackets are wrecked by mid-major schools who hang around and capitalize on their moment to knock off the blue bloods. Then, once it’s all over, the late Luther Vandross serenades us from the grave with the seminal ballad “One Shining Moment.”

As the 1982 final came to a close, Georgetown led 62-61 with less than a minute left in the game. Dean Smith called a timeout and drew up a play for the young freshman who would eventually become the most iconic basketball figure in history. As the play unfolded, Michael Jordan nailed a jumper from the wing to put the Heels up by two with 17 seconds left. Georgetown had the ball with one last chance to win the game but Hoya point guard Fred Brown, who seemed to become possessed by the pressure of the moment, picked up his dribble at the top of the key and passed the ball directly to James Worthy, who in turn streaked down the court and was fouled.

I was shell-shocked, devastated … and completely hooked on the madness.

Evan Wix (@EvanWix) is a guest contributor for Little Utopia.