“Somewhere between Andrews and the highway, we exist,” said Jacob Jeffries of the Jacob Jeffries Band this past Saturday night in Fort Lauderdale. From the stage, Jeffries — charismatic and talented, a reincarnation of Elton John or Little Richard, if Elton or Richard had worn skinny jeans and flannel — gave this existential pronouncement: “We exist.” 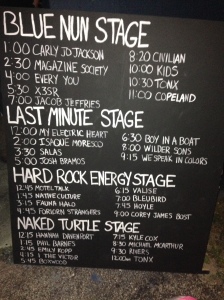 Line-up at For the Love (Little Utopia)

And exist we did — all of the hundreds of people who turned out for Fort Lauderdale’s own music festival, For the Love, on February 7, 2015. We existed in the middle of a city (in between Andrews Avenue and I-95) that has for the past several years made strides to shed its Spring Break destination, drunk-and-trashy look and adopt instead a more nuanced and varied cultural identity.

Sponsored and produced by C&I Studios and Exposed PR, two of the mover-and-shaker companies based in Fort Lauderdale, Florida, For the Love brought in local and out-of-town bands for the first ever, day-long musical festival. Headlined by Copeland, a perennial favorite in South Florida, the festival showcased over 30 musicians and bands, including -kids-, Civilian, and Hoyle.

For me though, a particular highlight of the festival was Forlorn Strangers, the Nashville-based Americana quintet that absolutely killed it on Saturday afternoon. The musicians switch back and forth between instruments, bringing in banjo, fiddle, harmonica, and mandolin to supplement the guitar and upright bass. The band plays seamlessly together, and watching them perform makes audience members like me want to dance and laugh. There was something about their music, about the way that they shimmied on stage and stomped — there was something about it that could have filled me with joy and tears at the same time. That feeling was, in short, the experience of existing.

Forlorn Strangers at For the Love (Little Utopia)

Fort Lauderdale and the greater South Florida area should be thankful for this music festival, which is yet another development of Fort Lauderdale’s cultural identity. I hope the festival becomes a yearly event, and that it continues to influence the city as a whole and the festival goers, too.

Because for that day — and hopefully for a long while to come — somewhere between Andrews and the highway, we existed indeed.