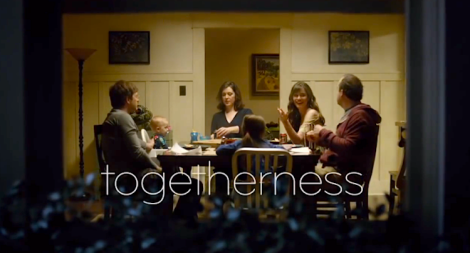 Because shows on Netflix or other streaming sites have replaced books in the totem pole of culture, I have begun to, yet again, start a new show called “Togetherness.” The show stars Mark Duplass, a primarily indie filmmaker who specializes in “mumblecore” movies. If you’ve seen Safety Not Guaranteed, or Jeff Who Lives At Home, then you’ve seen a Duplass movie. In “Togetherness,” he plays Brett. The show also stars Melanie Lynskey, whom you have probably seen on “Two and a Half Men,” where she plays the character Rose. She stars as Michelle in the show.

Brett and Michelle are married with two children, but more on their inner-family life later.

Alex, Brett’s best friend — think JD and Turk from “Scrubs” — has been evicted from his home, and actively seeks to return home to the Midwest after his “acting gig” didn’t work out. He is balding and a bit of a schlub, so nobody is going to take a chance on him to do anything special with his career, with the exception of a few medicine commercials. You know, the ones that have a character who grabs his stomach after it gets upset.

Brett won’t allow his friend to leave — he can’t. Family life is too hard, and frankly, it’s too boring without Alex. So he asks him to stay with him.

Meanwhile, Tina, Michelle’s sister, has come to California from Houston in hopes of expanding her business and getting serious with her boyfriend-ish guy. Well, what she thinks is serious, isn’t so serious to him. Eventually, he breaks up with her over a text message, leaving her heartbroken. She is a woman of a certain age; however, she doesn’t want to go back to Houston, so she enlists to stay at her sister’s house. This is the setting, with the five of these characters living in the same house, trying to figure it all out.

Family life for Brett and Michelle is a complication, but it’s really their relationship that’s the issue. In the first scene of the show, which is probably one of my favorite scenes of all-time, Brett tries to have sex with Michelle. He is shot down handily by her. This is a recurring theme in their marriage evidently, because later on in the first episode, Brett poignantly asks Michelle, “Why won’t you have sex with me anymore?” To which she heart-wrenchingly replies, “I don’t know.”

The emphasis on their relationship isn’t exactly what’s important to me. If their relationship was the telos (or end) of the show, then it wouldn’t be that different from other shows. What makes this show different is the authenticity with which the characters, specifically Brett’s character, desire something beyond what life has thrown their way.

Brett works as a sound engineer for a television studio. The show consciously wants us to be aware that he isn’t attracted to all of the frills of television-making culture. He wants the real. That’s why he can listen to a robin sing and take out his phone to record it, amidst the street lights and drunk middle-aged women walking to the next bar. He senses trouble in his relationship, because he and his wife are staring at the rest of their lives, only to see frivolity and disconnection.

That’s why I am drawn to this show.

I am drawn to Brett, because I can see myself in him at times.

Previously from Christopher Cruz:
♦ The Deflated (But Not Yet Defeated) New England Patriots
♦ Why Our Choices Matter
♦ A Listicle You Can’t Refuse: The Five Best Movies I Saw This Year
♦ Wait, When Did Playing Video Games Become a Sport?
♦ “Interstellar” is Truly Out of this World