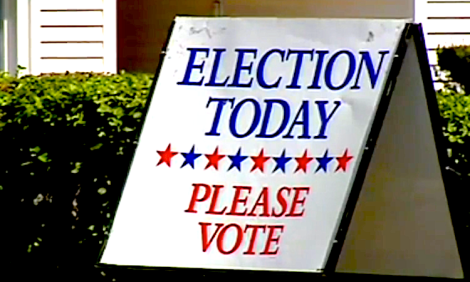 A shrill beeping wakes us from our slumber. Natural instinct makes our hand shoot out to make it stop. Minutes later it is back again. We could continue our protest, but it would be in vain. The sun isn’t up yet, but Election Day is here. There’s no stopping it.

As we head off to work, we wonder if we should even bother to vote. After all, some guy said we shouldn’t feel bad about not voting. Maybe we shouldn’t then?

But as we near our polling precincts, we start to hear the voices. The voices chastise us for this choice. How can you not vote? they ask. Don’t you realize the sacrifices others have made for you to have this right?

Of course, we respond to the voices. But then we try to explain that our votes don’t seem to matter when America is a democracy in name only, and that these days the country we find ourselves in is closer in form to an oligarchy or a plutocracy, depending on your semantic inclination. We try to explain that the system is broken and as long as it remains so, it doesn’t serve us. Picking the next politibot who will cater to the money interests that placed him/her in office doesn’t appeal to us all that much. The voices don’t understand, so we say: fine, fine we’ll vote, even though we’re not all that sure.

Just as we pass the polling precinct a few minutes before 7 a.m., we notice there are only a few stragglers standing in line. During the presidential election in 2012, the line took an hour to get through and much longer in some select places. Fuck it, we say and pull in.

We stand behind a few dedicated citizens from the neighborhood, who make small talk. Oh, you live around that corner? one man says, I live around that corner. No one comes out for the midterm elections the other says. We look around. It is hard to argue that point. Once inside, we check in at the makeshift kiosk. Our process is relatively smooth, but it’s not going so well for the man next to us. He’s told he asked for an absentee ballot from the chipper volunteer. He denies that he received it. OK, well if you do receive it just tear it up she tells him and hands over the ballot. We think this is a good omen.

We will be more than happy to welcome our cat overlords. (Screen shot from http://youtu.be/8WqZvKMK1pM)

We leave our precinct in a cold sweat and with a sullen countenance. Why do we do this to ourselves? We have no good answers. Thankfully, there is an email in our inbox when we get to work to shake us from our period of self-loathing. “Funny” the subject line reads.

The email is a link to an article about Stubbs, a cat that has been mayor of Talkeetna, Alaska since 1997. We laugh for a minute, but then we start to read more. We learn about Tuxedo Sam, a cat that ran for mayor in Halifax, Nova Scotia and Tama, a cat that served as a station master in Japan. Maybe it’s time that we let cats run our entire government. At this point, is this that crazy?

Cats are mean and selfish and would get absolutely nothing done as elected officials. So, very little about the way our country is run would actually change. At least though, the cats wouldn’t make anything worse. And they’d look soooo cutesies in their little tuxedos. Wouldn’t they? Wouldn’t they? Who’s a nice cat? Mr. Jasper, who represents the 53rd Congressional District, is a nice cat. Yes, he is.

We are heartened to hear that Stubbs has filed a last minute campaign for a Senate seat in Alaska. But we hope he loses, because we have bigger plans for Stubbs. A senator has too little power. In order to usher in the Catocracy, Stubbs needs to run for president.

A friend has already helped us come up with a slogan for his 2016 presidential campaign: I can haz Oval Office?

We are almost certain he’d win in a landslide.