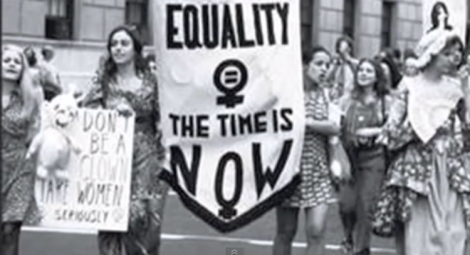 I’m not sure why I did this, but I went on Salon.com a few days ago and read an article. It’s Salon.com and it’s on the internet, so I don’t know what I expected when I read that article and the ensuing comments, but I certainly did not expect the vitriol and hatred that met my eyes.

You see, I read Ellen Burkhardt’s article “When guys find out I’m a virgin.” In the article, she details the reasons that she has decided to remain abstinent until marriage and the difficulty she has experienced in finding someone willing to date her because of (or in spite of) that decision. One of her reasons for this choice is religious-based; she identifies as a Christian who “was taught that sex is for marriage.” She discloses other reasons for her decision to refrain from sex until marriage, reasons not linked to religious beliefs.

Okay, that’s cool, I thought as I read, She’s making a choice about what to do with her own body. WRONG! According to many of the commenters on the article, she.is.not.making.a.choice, OR she is making the wrong one.

Some of the commenters kindly (not!) recommended therapy to Burkhardt. Apparently, by reading one article by Burkhardt, many commenters (doubtless physicians all) were convinced that she was “browbeaten” into her decision of “fetishizing virginity.” They called her article “disturb[ing]” and apostrophized to the philosophy and rhetoric gods, asking “What does the author think is interesting or enlightening or informative about this essay?” These commenters did not stop at critiquing the logic or the form of the article but went beyond that to call Burkhardt a “silly, pitiful person” (ad hominem logical fallacy, btw.), “creepy,” “crazy,” “whin[y],” and “not ‘marriage material’.” The comment stream also included gems like “Screw you, church.”

These comments were hurtful not only because I am making the same decision as Ellen Burkhardt, but especially because I am making the same decision. That’s the thing — I, as a woman, am making a decision about my body and what I do with it. Using my own agency, I am making a logically derived, conscious decision. Belittling and denigrating my choice about my body (and Burkhardt’s choice about her body) is some of the worst anti-feminist drivel I’ve been exposed to since my days working as a cart girl at a golf course. It’s like the 70s never happened, like the fight for a woman’s right to have agency has availed little in light of the hateful comments of those secure in the comfort of their internet anonymity.

Even worse, I think, was that some commenters employed the same arguments used by those who justify rape and rape culture. One comment informed us all that “most American men simply aren’t willing to wait until marriage,” another that “progressive non-asexual men” would absolutely not abstain from sex. That line of thinking relies on the characterization of men as beings with voracious sexual appetites, appetites that cannot wait to be satisfied. That is the same characterization of men that those justifying rape culture use when they blame rape victims for “tempting” their rapists — the men who cannot say no to sex.

Internet comments generally suck, but these were worse than ever. I have taken the risk of giving exposure to some stupid-ass comments and their authors’ stupid-ass usernames (that means you, @Lovecutefeet), but I do so to expose their anti-feminist rhetoric and to tell them to STFU about bodies and choices that are not their own. It’s my choice; it’s Burkhardt’s choice; it’s no one else’s. And to deny that is to deny women the agency not only to make choices about sex, but the agency to make well-informed decisions for themselves.

Most Recent Articles:
♦ What to Write When You Can’t Seem to Write at All
♦ Happy Birthday, Sweet Hobbits; and a Viral Video of the Week
♦ It’s the Economy, Stupid: A Reply to Bootstrappers Everywhere
♦ In Miami, Nothing is Given: A Response to LeBron James’ PR Team
♦ My Spirit Airlines Life

5 responses to “For Ellen Burkhardt and I, No Sex Until Marriage is a Choice”