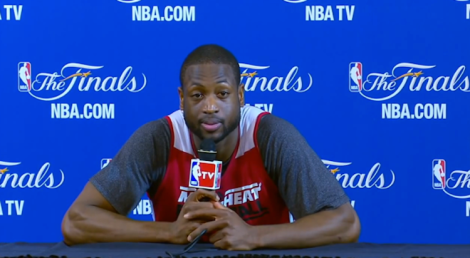 Can Dwyane Wade regain his All-Star form?(Screen shot from http://youtu.be/tnRzKH5VeTI)

A lot of people doubt Dwyane Wade’s ability to return from a postseason like the one he had last year. Wade often seemed out of shape, slow, and lazy, specifically on defense when he was matched up with younger, more agile offensive players like Danny Green, Tony Parker, or Patty Mills. According to the Bleacher Report columnist Tom Sunnergren, “While Wade set a career high in true shooting percentage in 2013-14, and finished second among all shooting guard’s in PER … he looked spent in the playoffs. His .086 win shares per 48 minutes was the second-lowest of his playoff career, and his defense oscillated between shaky and nonexistent.”

But I do not doubt him.

Yes, he is older. Turning 33 in January usually means that retirement is only a few years away, and he will probably soon be heading the way of other retired Heat greats — to the bench alongside Eric Spoelstra or doing community organizing. But his time in the NBA isn’t quite done yet. He still has life in his legs.

Wade has lost a considerable amount of weight since he began the offseason, cutting out fattening foods in his diet, as we have seen in his Instagram photos. He has also been working out — not with the vast array of muscle-building regiments he once used — in new ways to refine and ultimately yield a durable body that can withstand the upcoming year. Even if Ray Allen won’t be returning to play with his buddy Wade again (burn), Wade has taken the advice of the legendary veteran, who has understood for a very long time how to remain in game shape as the body ages. Wade is doing all he can for a comeback on par with Kobe Bryant’s, who did not want to see his career go by the wayside as injuries started to pile on, and so began to eat healthier, train smarter, and improve his body for maximum performance. Wade’s new motto seems to be “if Kobe did it, then I can do it.”

Also, it is not as though Wade forgot how to play basketball. Last year we saw the inevitable outcome of a player who has not taken proper care of himself. But that doesn’t mean that Wade hasn’t learned how to cope with that. Even as an “overweight, lazy” basketball player, Wade has still learned to score at a high level, posting 19 PPG on 55 percent shooting last season that nobody has really talked about. He also averaged 4.5 RPG and 4.7 APG, even though LeBron James got the majority of touches on the team.

Oh, and before you think that Wade’s percentages are because of James, I’d submit that the numbers were due to wisdom much more than the play of his former running mate. His percentages since 2012-2014 have only gone up, which implies that he has learned to pick spots on the floor where he can be successful. Wade’s midrange game has been particularly helpful for him as well, shooting 42 percent from 10 feet to just under 3-point range. Although he probably won’t be giving us a highlight like when he put his knee into Anderson Verajao’s chest and dunked on him, he might do the more subtle assassin-like things that Kobe does.

Wade is primed for a comeback now with greater responsibility on his shoulders. We just need to have a little bit of faith.

Christopher Cruz (@_chris_cruz) is a guest contributor for Little Utopia.

Previously from Christopher Cruz:
♦ Jimmy Kimmel Really Makes Fun of Us All
♦ How Not To Get Kicked Out Of Your Fantasy League
♦ In Order to Return to Dan Gilbert and the Cleveland Cavaliers, LeBron James Must Forgive
♦ Babies, Blogs, and Pretense