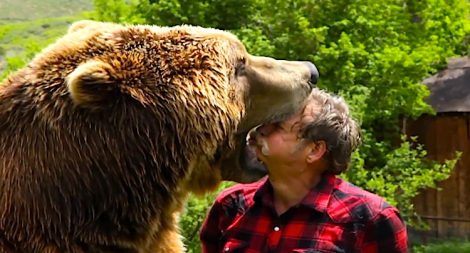 No humans were harmed in the making of this picture. (Screen shot from http://youtu.be/9nSWc43TLaI)

Picture this: You are a Russian fisherman. It’s early, you’re still sleepy, and you really don’t want to have to go to work today. As you head to your fishing spot, something crashes into you from behind. Suddenly, a bear is on top of you, and you are being mauled.

You try to struggle, but it’s not doing any good. Just when you have given up hope, your phone rings. Your ringtone is “Baby,” because your granddaughter loaded it onto your phone as a joke. Great, you think, not only am I about to be horrifically killed by a bear but the last thing I hear on this Earth will be a song by Justin Bieber. All of a sudden, almost as soon as the phone rings, in fact, the bear flees. You are injured, but you will live.

Even though Justin Bieber is a scourge upon humanity loved around the world only by tweens , his music will save you if you are ever attacked by a bear. Bears do not appreciate American boy-band-style pop music; Bears are mostly traditionalists. Bears say, “Pull your damn pants up!” They are bluegrass aficionados.

One response to “Justin Bieber is Pretty Much the Worst, but His Music Will Save You from a Bear Attack”