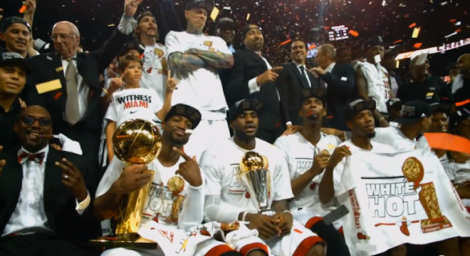 The Miami Heat’s empire is done, paving the way for another to rise. (Screen shot from http://youtu.be/mCaaOlV6YX8)

Around the turn of the 19th century, a phrase started to appear in writings and speeches about the seemingly unending expansion of the British Empire. Although the phrase had slight variations, its message was consistent: The sun never set on the British Empire, and that wasn’t changing anytime soon. Except we all know that it did change … eventually. The sun set, and the empire crumbled.

Although the famous phrase was coined to discuss geopolitics, it’s apt for descriptions of the greatest sports teams as well (in sports jargon, though, “empire” is usually replaced with “dynasty”). During a great team’s run, it often appears as if there’s no end to it in sight, but the signs of the end are always there if we are willing to see them.

All dynasties end because they have to end. There’s no way around it. Over the last two months alone we’ve seen two draw to a close; Spain’s embarrassing exit from the World Cup and LeBron James’ decision to leave the Miami Heat have signaled the end of empires in world soccer and the NBA, respectively. And while both of these dynasties ended in part because of different small, concrete reasons, their end is more directly attributable to a larger, abstract cause.

Of course, the smaller reasons — which can include things like voluntary or involuntary player movement, injuries, complacency, old age, “the disease of more,” and salary cap limitations — are easier to spot initially. The end of Spain can be partially attributed to complacency and the aging of its core players. Similarly, aging took its tole on several of the Heat’s key role players in the final season, but Miami was also done in by salary cap restrictions and, obviously, the exit of James.

But while those reasons are easier to point to, teams can initially stave off these issues to prolong a run. What they can’t fight off is the true reason dynasties end — the death of the team’s philosophy. Over time, the guiding philosophy that led a team to so many victories no longer proves superior, either because opponents are able to counter it or because it becomes unsustainable. 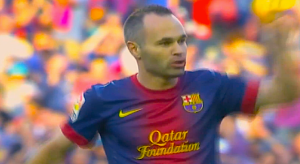 Andres Iniesta was one of the key figures in Barcelona and Spain’s recent run of dominance. (Screen shot from http://youtu.be/VHCYBsGxOJ0)

For Spain, that philosophy became known as “tiki-taka,” a style based on possession, short passing, and movement. Tiki-taka began its development at FC Barcelona in the early 90s and made its way into the team’s youth system, which produced many of the players who would later play for Barça and the Spanish national team. The revolutionary system allowed both the club and country to control world soccer for an extended time.

But, as Spain’s defeat at the World Cup and Barcelona’s lackluster season has shown, even if tiki-taka isn’t completely dead, it has certainly been found out. Teams like Bayern Munich, the Netherlands, and Brazil have shown that pace, counterattacking, and physicality are antidotes to the Spanish potion. Tiki-taka is no longer the unsolvable riddle it once was.

Even if tactical philosophies aren’t completely defeated, they will at some point become unsustainable. During the Big Three Era, the Miami Heat’s pace and space offense and blitzing defensive scheme took the league by storm, guiding the Heat to four straight NBA Finals’ appearances and back-to-back championships. Unfortunately for Miami, the system revolved around James, a generational talent whose combination of size, athleticism, and skill the league had never seen before. With James’ departure, this philosophy can no longer be sustained, primarily because it was so predicated on his skill set.

Even before James’ return to Cleveland, Miami’s philosophy was already in the process of alteration by its coaching staff, due to the wear and tear that the defensive system placed on its players. As the Heat’s roster started to age, the defensive strategy collapsed, and the San Antonio Spurs took full advantage of this decay in the 2014 NBA Finals. If James had stayed, either the system would have needed further alteration, or new players would have had to come to Miami to revitalize it.

No matter how they finish then, sporting dynasties will always end because the philosophies that sustain them have a finite lifespan. Almost without fail, the endings are tragic — once-great players break down, others are traded away, or an upstart team puts the final nail in the coffin with a bludgeoning in a playoff series.

But, even if the ends of empires are immediately upsetting, they really shouldn’t be. The ending of a dynasty is always a positive for the sport in the long run. With each ending comes a further evolution in the sport, one that makes the sport greater and more exciting for fans and players alike.

Think about it. Without the “total football” of Ajax and the Netherlands in the mid-60s to mid-70s, there is no tiki-taka. Without Mike D’Antoni’s “Seven seconds or less” Phoenix Suns teams, there is no pace-and-space Miami Heat. The prevailing philosophy of an era has to be overcome for the next evolution of the game to take place.

And whether we know it or not, sports fans live for those evolutions. If dynasties never faded, the NFL would still be throwing six passes each game instead of 40, and every NBA team would still be running the Princeton offense. Sports would recede into an afterthought, or they would become niche activities that few were interested in at all.

Sporting empires are important because they can revitalize a league when it has hit a lull. But their death serves an greater purpose. Great teams have to die so that others may live.

After all, the sun had to set on the Spanish empire before it could rise over a British one.