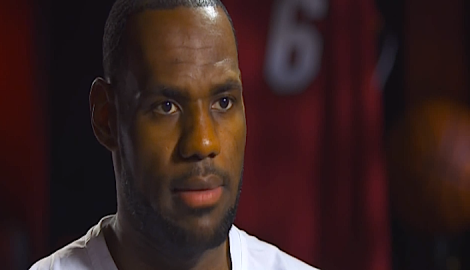 The NBA world is waiting on James. (Screen shot from http://youtu.be/_tiTaqEHq3E)

[Update: LeBron James is signing with the Cleveland Cavaliers.]

Everyone has officially dirtied their pants.

Virtually nobody whom I have spoken to has any confidence in the idea that LeBron James will be rejoining the Miami Heat. This is not just the opinion of the casual person that I meet on Bird Road, but it is also the radio personalities and journalists that I have listened to and read. The past few days — and specifically Wednesday — I have been thinking about the situation and wondering, “Why?” Why would James put us through this? Why would James go play for him?

The him that I am referring to is Cleveland Cavaliers owner Dan Gilbert. He spewed vitriol for James with the anger of a pitbull foaming from the mouth. Plenty of people have already accused Gilbert of sounding very much like a slave master who baited James, using words that hinted at James quitting on the team, and using specific games as examples. Such a public outrage has probably never been seen in the history of sports outside of the Sterling situation, which is a situation James has publicly denounced. As a matter of fact, James said that he could never play for an owner like Sterling.

So, again, the question that I am asking is why is Cleveland one of the two contenders seemingly wooing and seducing our beloved King?

This morning, Dan Le Batard went on the Jonathan Zaslow and Joy Taylor morning show on 790 The Ticket. They asked him point blank, “Should Lebron be judged [if he returns to Cleveland] given all of his public moral outrage at racism with the Sterling matter, or the Trayvon Martin case?” And yes, his responses, by and large, have been seen by the public as virtuous. But Le Batard’s response was something I did not expect. “We vastly underestimate the draw of someone going back home. And people in Miami aren’t going to like this, but forgiveness is a pretty cool thing too,” he said.¹

Nobody, at least that I had heard was talking about this, but it was unbelievably true. Forgiveness is an incredibly virtuous thing, and by going back home he’d be displaying that for the public to see. And he’d be having three cakes and eating them as well. Le Batard’s response changed how I look at the situation. Maybe James wouldn’t have to “tolerate” the situation, the way that we often speak of tolerance in our post-post-modern society. Nor does he have to choose the hair-slicked wonder-GM, who has put out the red carpet versus the angry white man. Maybe he can love despite the hurt Gilbert caused him, which is to say that James can forgive Gilbert. And in some way, I feel like that would be the greatest story that emerges from this whole narrative.

Let’s just hope that he’s like the rest of us and isn’t the forgiving type.

¹ I don’t understand the notion of “going home,” and I am willing to bet that a lot of Miami fans won’t either. Miami is my home in that it is my place of residence, but I don’t have a specific tie to the land as some people have to their own state or country of birth. Many Hispanic individuals, or the individual’s family members came from another country, and thus that displacement has left many Hispanic Miamians wanting when it comes to the idea of going home. There is something that I am definitely missing from this part of the discussion.

Christopher Cruz (@_chris_cruz) is a guest contributor for Little Utopia.