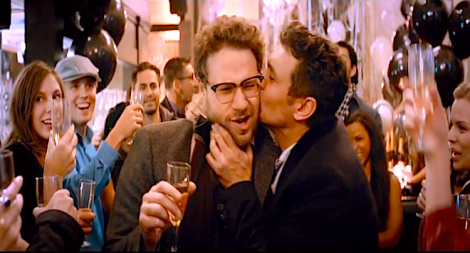 Rogen and Franco in The Interview (Screen shot from http://youtu.be/Mj3uHftd5FQ)

Depending on how you feel about them, James Franco and Seth Rogen are either two guys who are still making funny dick jokes in movies or two guys who jumped the shark a while back. Maybe you have a nuanced view of them that falls somewhere in between. Either way, your opinion doesn’t really matter the same way that the opinion of a leader of a hostile country might.

In their latest collaboration, Franco and Rogen star in The Interview, where they play two talk show hosts who are sent to assassinate North Korean leader Kim Jong-un.

As you might imagine, Kim Jong-un hasn’t really been willing to laugh this one off. At first, Kim Myong-chol, unofficial DPRK spokesman and Kim Jong-un associate, told The Telegraph that North Korea is pretty pissed about the whole thing.

“There is a special irony in this storyline as it shows the desperation of the US government and American society,” Myong-chol told The Telegraph. “A film about the assassination of a foreign leader mirrors what the US has done in Afghanistan, Iraq, Syria and Ukraine. And let us not forget who killed [President John F.] Kennedy – Americans.” He also added that, “James Bond is a good character and those films are much more enjoyable.”

But apparently the supreme leader felt that that wasn’t a strong enough message. So, a few days later, North Korea released another statement. According to Agence France-Presse, an unnamed spokesperson said that the making of the movie was “a most wanton act of terror and act of war, and is absolutely intolerable.” He also added that if the US administration did not outlaw the movie from being shown, it would trigger a “resolute and merciless response.”

So yeah, this whole thing is pretty preposterous. It’s really easy to laugh at and make fun of North Korea and Kim Jong-un for taking — of all things — a Franco/Rogen movie so seriously. But hey, if another country made a movie (even a comedy) about assassinating President Obama, you’d see plenty of people calling for the US government to take action against that country, even if you or I might not be one of them.

Even if you might not agree with that, I think we can all agree that it would be really, really lame if World War III was kickstarted by a movie, especially a movie that’s probably going to suck. Let’s hope that Kim Jong-un finds the execution of the film a bit more humorous than he finds the premise.