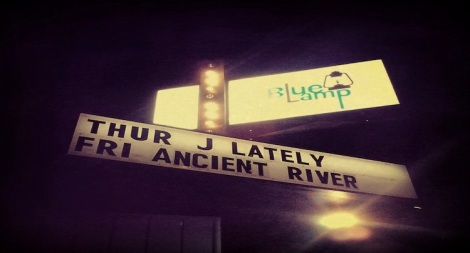 [Editor’s Note: This is the twelfth part in an ongoing series chronicling Ancient River’s 2014 North American Tour. If you missed the first part or would like some background on the series, click here.]

Sacramento was about an hour away, more or less, so we had time to get a room near the venue and relax a bit. I watched “Bad Boys,” a documentary on the Detroit Pistons and had a much needed shower. Sacramento seemed very corporate and developed. It reminded me of South Florida but not in a good way. It was a bit more conservative feeling than the other areas of California. We arrived at the Blue Lamp and had some beers with the other bands. Like last night, the other bands were very good and fit well on the bill with us. Our buddy Clay from the night before played with his band, The Spiral Electric, and they blew me away. Everyone was very friendly, even the giant security guys. The owner enjoyed our set and hung out with us after the show. After that show we had three days off, and I couldn’t wait to fill them with sleep and basketball.

Being on the west coast is great for a basketball fan. You get to watch the game early in the day, leaving your night free for more social activities. I don’t think I left my bed until about 3 p.m., after watching my fourth game in a row (it’s an obsession, and I need help). It was the first day of the NBA Playoffs, and I couldn’t have picked a better day to have off. We left once to grab some food and then went back to sleep.

Today we planned on seeing one of our most beloved and respected bands, Dead Meadow, in San Francisco. So we hit the road, arriving at Haight-Ashbury just in time to partake in the last few hours of the massive 4/20 holiday celebration. Haight street was closed for the day, allowing for hundreds of people to walk the streets in celebration. Everybody was smoking. Literally everyone. There were stoners from all walks of life. It was a beautiful day to be there for the first time.

We strolled down Haight with huge smiles on our faces. There was a bubble machine in the middle of the road blowing bubbles over a sea of people as the sun set gently over the horizon. A man sat against a wall drumming on buckets and his rhythm pulsated through the crowd of people surrounding him. Beside him a circle had formed and rappers took turns freestyling. I hung out there amongst the crowd and took in everything around me. We got to the end of Haight, past the Amoeba records store, and sat on a hill in the park and watched the sun’s last goodbyes. We left just in time for the show, got our tickets, and mingled.

Dead Meadow sounded amazing as usual, and the venue (The Chapel) was great. Afterwards we asked some girls if they knew of a good lookout point, and we ended up on a hilltop golf course next to a hiking trail and a labyrinth. We hung out there for a while, appreciating the view of Alcatraz and the Golden Gate Bridge. We found out we weren’t supposed to be there, and there was also a creepy car parked near us. We quickly realized that neither of us wanted to end up on forensic files and hit the road to L.A.