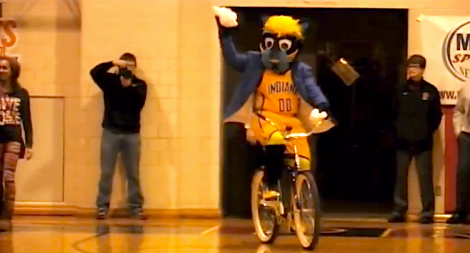 I thought it might be a sign when I noticed for the first time that the Indiana Pacers’ mascot is a cat. And what a cat it is. It gets really, really involved in the game at hand, like a super-mascot. It is, of course, a cat, so why wouldn’t it go above and beyond its regular mascot duties? Did the Pacers’ brass — knowing our culture’s obsession with dancing cats, keyboard-playing cats, flying cats, cats of all kinds — purposely make their mascot a cat so that America would fall in love with it? We may never know.

According to Wikipedia, Boomer, “one of the more accomplished NBA mascots,” is often selected to be part of NBA All-Star Games. He also dunks (backwards!), has his own “webcage” and is really good at making puns. At 6 feet tall and 23 years old, he is currently the background on my laptop. I’m a Miami Heat fan but not when it comes to Boomer.

So, is this a sign that the Pacers will finally beat the Heat in the Eastern conference series? Unfortunately for them, I think not. Instead, my prediction for Boomer is that he will make a big life change and switch his allegiance to Miami once they win the championship for the third time in a row. Once he does so, Boomer can join Burnie in a beautiful friendship. The duo can cheer on the dream team, help each other with trick shots, and dance together so that Burnie doesn’t have to relive his old legal troubles by dragging any more federal judges’ wives on the court to dance with him at Puerto Rican exhibition games.

Welcome to the Heat family, Boomer. We know you’ll make a great addition.

Previously from Laura Creel:
♦ A Reflection on Lent
♦ Viral Video of the Week: Wheel of Fortune Domination
♦ Arthur Chu Dominates Jeopardy!, Haterz Foiled Again
♦ Enough With the Pizza Already: Reactions to the 2014 Academy Awards
♦ I Found Love in a Heart-Shaped Place