The drive into Denver (Ancient River)

[Editor’s Note: This is the tenth part in an ongoing series chronicling Ancient River’s 2014 North American Tour. If you missed the first part or would like some background on the series, click here.]

We arrived in Wichita, Kansas around 3 p.m., early as usual. We loaded in our gear and checked in with the venue. Wichita was incredibly windy, much more windy than the “Windy City.” There was a huge arena one block over from the venue, hosting a professional bull riding tournament. The streets were flooded with cowboys and cowgirls, in addition to high school seniors taking senior photos and having dinner before their prom. We grabbed a bite to eat at a small cafe next door, and then we took a nap in the truck to time travel closer to show time. Super rock ‘n’ roll, I know.

Around 9 p.m. we hung out at the venue and had a few drinks with the local band Deathblack Flowers. They were really nice guys and played a great set. After the show, we loaded up our stuff and said our thank-yous and goodbyes. I attempted to jump up and touch a sign that was obviously out of reach — about twelve or thirteen feet high. I knew I couldn’t, but I felt happy enough to try twice.

We went to a Denny’s and planned out our drive to Denver, Colorado. We asked a waitress if it was okay to leave our waiter’s tip on the table. She said she wouldn’t recommend it, gestured toward some black people, and said “We have a lot of … well you know.” We were appalled. We made sure our waiter got his tip. He was having a rough go of things, at one point dropping some stuff off a table as the customers laughed and made fun of him. He was doing a great job, and I hope that dude sees better days. We were made privy to a snow storm headed to Denver, so we decided to drive straight there through the night to beat it. I made a little nest in the back of the truck and attempted to sleep while James took the first driving shift.

James had driven for several hours, made good progress, and was doing a great job handling the bad weather. We drove through a snow storm with heavy winds, low visibility, and icy roads. Now it was my turn to take over. I took it easy in the slow lane, and we finally got out of the storm and reached Denver after a few more hours. 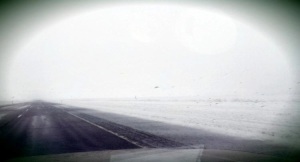 The view through the snowstorm (Ancient River)

We arrived at our buddy Ray’s house just as the storm began in Denver, with about five hours to spare until showtime. We were a little concerned that the snow would keep people inside for the night, especially on a Sunday, but it was also cool for us just to see the snow. We got a brief second wind of energy due to the excitement of being in Denver, but in no time we were passed out in Ray’s living room. Ray was one of our best hosts yet. He woke us up to a dinner he had made himself, a delicious slow cooked pasta dish with Italian sausage and fresh Brussels sprouts. Thanks for everything, Ray!

The venue was close by and I noticed plenty of marijuana dispensaries on every block. However, it was business as usual in the city, and it seemed like the dispensaries didn’t have much of an impact on daily life in Denver, beside providing millions in tax revenue for the construction of schools and infrastructure. Way to go, Denver!

The venue was called Lion’s Lair, and it had warm vibes to it. I was pleased to see a nice sized crowd despite nearly a foot of snowfall outside. I wish I had done more mingling, but I wasn’t feeling well after the overnight drive. I slept until the last possible moment, loaded up on stage, played a solid set, and went back to sleep after packing up. I woke up to listen to Ray’s band, Thee Dang Dangs, and went back to sleep yet again. When we finally got back to Ray’s place, I slept until 3 p.m. the next day.

We had the day off so it was nice to relax and make sure I was healthy. I stopped by a clinic and got checked out. Turns out that I was not only healthy, but because of playing drums I was in above average condition. Good to know. While I handled that business, James did some exploring and had lunch.

His Bloody Mary review: “It had excellent presentation and taste and included okra, celery, olives, and even a shrimp. The okra was a nice touch.” Updated top five: 1) The Foxhole in Columbus, Georgia; 2) [Forgotten location] in Denver, Colorado; 3) Edley’s in Nashville, Tennessee; 4) Zaza’s in Conway, Arkansas; 5) Siberia in New Orleans, Louisiana.

He stopped at a dispensary and picked up some goodies for us. It was surreal buying joints with a debit card. At one point we were talking about it in public, and I realized our voices had gotten down to a whisper. Then I realized we were in Denver, there’s no reason to be worried or secretive. We stayed another night at Ray’s, woke up early, and hit the road to Salt Lake City.