[Editor’s Note: This is the eighth part in an ongoing series chronicling Ancient River’s 2014 North American Tour. If you missed the first part or would like some background on the series, click here.]

We had a day off today in Detroit, Michigan, so I decided to take James over to my aunt Helen’s house to eat a home cooked meal. It was nice to be able to visit her as a touring musician, rather than just on vacation. It brings me great happiness to hear that I am making my family proud. She cooked us the best meal we’d had all tour: yellow rice with beans, salad, and delicious tacos with onions and cilantro. I eat with James every day, and this is the only time I’ve ever seen him grab a second plate. We watched the local news and saw a report on recent killings at gas stations all around Detroit. We decided to get gas out of town. After relaxing a bit with my family, we took advantage of our time and got an early start on the drive to Indianapolis, Indiana. We went about halfway and got a motel room. After watching UConn win the NCAA Men’s Basketball Championship, we got our rest.

We arrived in Indianapolis around 3 p.m. the next day. We were playing a house show in an area known as Fountain Square, and we had plenty of time to kill. We wandered around the city and stumbled upon some pretty cool stuff. We stopped by a White Castle district office and got educated on the area we were in. We asked the woman there for a tour of the office, but she declined. I grabbed a couple pamphlets about the history of White Castle and got out of there. 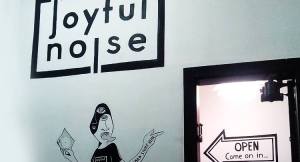 Down the street we saw a Mexican restaurant, La Margarita, and decided to hang out there for a while. The front door led us to a hallway with multiple doors. We saw a sign for a record store, so we went through that door and up some stairs to discover an entire floor of artist studios. There was rock ‘n’ roll blasting from one of them, some dudes pressing vinyl in another, but the door to the record shop was locked. We peaked into another door and saw a complete stage set up in the same room as an office. A woman sat behind a computer with her dog Reagan (I only remember the dog’s name). Turns out we had stumbled into the office of Joyful Noise Recordings, a record label with a roster featuring Kishi Bashi and Child Bite among others. She opened up the record store and showed us some awesome looking records they had put out. Each had creative packaging and presentation. They pressed vinyl in all sorts of colors and patterns. They were beautiful. We thanked her and went down to the restaurant for some drinks, chips and salsa. They had some cool local brews that I was more than happy to try — for the people of course, I mean I have to write about something right?

First I tried an Indiana Amber, an American-style red ale by Oaken Barrel Brewing Company. I really enjoyed it, probably more than any other beer I’ve had this tour. I also tried a Working Man’s Pilsner, by Fountain Square Brewing Company. On the menu they had the locations of the breweries, and beside this one it simply read: “like two blocks away.” True. And of course, James ordered a Bloody Mary. James’ thoughts: Excellent presentation, but a tad bitter for my taste. The top five remains unchanged. 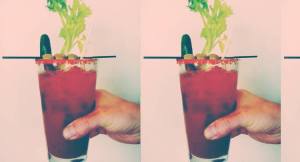 After pretending to be foodies for a bit longer, we went to the house and loaded in our equipment. We prepared to send our vibrations through the air and into the brains of the party-goers, via their eardrums. I was in the middle of a phone call when some dude stood before me, pointed at an Ancient River sticker, and then pointed at me. I nodded my head yes and he handed me two large plates of buttery mashed potato deliciousness, a cold beer (which was a luxury because the nearest store only sold warm beer), a cute little bottle of Fireball whiskey, a single cigarette, and a small, but much appreciated, donation. OK, this is pretty cool! The show went well, and the people were very friendly. Afterwards we went to a bar that was reminiscent of The Shining with some locals and hung out a bit at some random house. We ended up back at the house we played at, spinning records with our host until I finally passed out to the soothing sounds of Big Trouble in Little China on VHS.

Like our departure from Knoxville, we left before our host had woken up. We left him some CDs and hit the road.

While Michigan was somewhat of a homecoming for me, Chicago, Illinois is where James’ parents met and also where he learned to walk. He hadn’t been back since childhood, so this was a standout date on the tour for him. I had never been, so I was also very excited. We arrived early enough to go get a room and had just enough time to shower before going to the Burlington, tonight’s venue. We stayed at the coolest place we’ve ever stayed in my opinion: the IHSP hostel in Wicker Park. It had two floors of rooms (both private and dorm style); a common area with computers, television and videogames; and a pool table, a fully equipped kitchen, and 24-hour access to the roof.

We took showers and went to the Burlington. There was a good crowd, and the other bands were friendly. The show ended at midnight, which worked out great because we couldn’t wait to explore Chi-Town. We went back to the hostel, put on warmer clothes, and went out into the Wicker Park night. We ended up at The Flatiron, a rock ‘n’ roll bar that stayed open until 4 a.m. I asked the bartender what local beer he had on tap, and told him that I like dark beers. He suggested one, I agreed, but when he poured it he thought I’d like a different one better so he gave me a Half Acre. I thought that was pretty cool of him. It was good, but for some reason my memory of it is blocked out by that Indiana Amber. 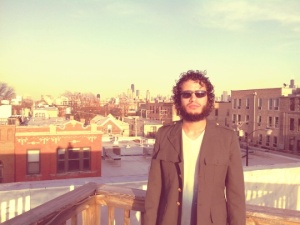 We met a sociable German man named Timmo and watched him order a beer, which was pretty funny. He tried to ask the bartender for advice, and the bartender said, “I don’t give advice. It’s a busy bar, talk to me when you’ve made up your mind.” I thought that was strange considering how helpful he was for me. Timmo was very disrespected, and after deciding what to drink (with our help) he didn’t tip. A woman told him to get Miller High Life or PBR, but I had him try a Half Acre. A random guy came up to us and freestyled, and it was actually pretty good. After sharing a laugh, he offered to sell us cocaine and weed, to which we respectfully declined. The rap was free of charge. Before we left, Timmo came back and hung out with us. We spoke about football (soccer) and music. He ordered another round of Half Acre and wished us luck. This time he left a generous tip. I suppose those Half Acres had lifted his spirits. He said he loved Chicago and that America has the best service in the world.

Afterwards we hit up a late night taco spot, Flash Taco. We were told there were better places to eat if it were earlier, but the tacos were ridiculously tasty. We bumped into some lads from Liverpool outside of the hostel. They were very happy and intoxicated, and they were super excited to meet a band. We agreed that Chicago is amazing and went back inside. After hanging out on the roof a bit, I relaxed in bed and tuned my snare drum while listening to that night’s show in headphones. We didn’t want to leave, and planned to do a little more exploring tomorrow.

One response to “Ancient River North American Tour 2014: Adventures in the Midwest”