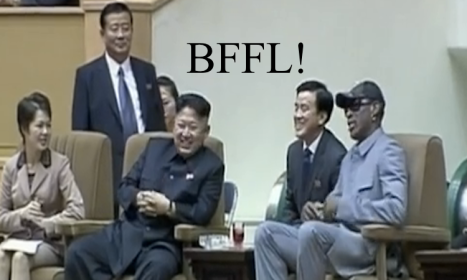 Is a rocky breakup ahead? (Screen shot from http://www.dailymail.co.uk/news/article-2536324)

Dennis Rodman and Kim Jong-un better watch out, because their friendship is ON THE ROCKS right now. Remember the Paris Hilton/Nicole Ritchie breakup? It’s gonna be worse than that.

A trusted source My brain explains the rupture in friendship as the result of Dennis’ hurt feelings. According to this source, Dennis “feels like he is always the one giving, but never gets anything in return.” And indeed, Dennis’ feelings are reflective of the behavior we have seen these besties exhibit over the past few months. Dennis gives astonishing interviews about BFF Kim, complete with unintelligible logic; he gives the gift of beautiful song; he gives the gift of humor. Kim is such a taker, though: He gets all the publizity and gets a spotlight on his dictatorial regime and is praised and coddled and legitimized by an American. Dennis flies around the world to bounce with Kim, without any sort of reciprocal behavior. Kim.Never.Gives.Back.

As wiser women than I have said before, long distance is the wrong distance. If Kim and Dennis want to mend their relationship before it’s too late, they will need to be honest with each other, and this will probably mean spending more time together. While Dennis “love[s]” his best friend, Kim has to open up about the person that he is inside — namely, the type of person who killed his uncle for political gain [like a modern-day Hamlet!]. It can’t all be just fun and games. Booze and drug-fueled partying has really brought these two together, but eventually they will find it necessary to address the deeper issues of the heart. God speed, you two.

Previously from Laura Creel:
♦ Heads Up, Parents: Your Kid’s College Education is Built on Tired, Poor, Sometimes Even Homeless, Teachers
♦ Waiting for Christmas in America
♦ Grocery Stores: Expensive? Yes. Universally Designed? No.
♦ “Angry Birds” Movie Leads the Promotional Campaign with the Tagline: “So Many Birds Have to Die”
♦ Celebrity Hair-Cutting News: #WhyJenWhy