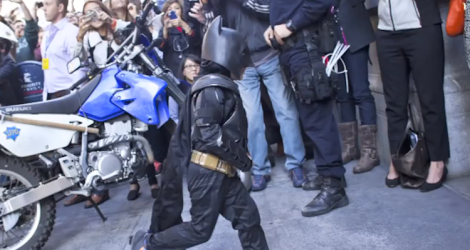 Batkid came to our rescue when we needed him most. (Screen shot from http://youtu.be/Dp1cCd-H3P4)

It’s hard not to be cynical about the current state of the world. And much of that easy cynicism stems from the way the media provides us with information. Every day it seems like there is more bad news: another natural disaster, another political scandal, another quagmire in the Middle East. In order to get any reprieve from it at all, you almost have to ignore the news stream entirely, something that’s practically impossible to do these days.

But, every once in a while, the news cycle brings along a story that makes us trade in our cynicism for feelings like hope, joy and gratitude. Last week, Batkid was that story. If you’re not familiar with Miles Scott’s story, this video will sum it up for you way better than I can.

Without a doubt, Batkid’s story is a wonderful one. It’s particularly devastating to see children stricken with a disease like cancer, and it brings us joy when hear about those who are able to overcome it. Stories like this also tug at our heartstrings because they remind us that as a community and a people we can come together to positively affect people’s lives, even if it’s for a short period of time.

Batkid’s story is powerful as well, I think, because it runs contrary to so much of what we see in our media. It’s hard to tell (for me, at least) whether there is actually more bad news these days than there was in, say, 1953, or if because we are inundated with all types of media 24 hours a day for seven days a week it just feels that way. While logic and reason suggest the latter, sometimes it’s hard not to believe that things really are hopeless when it’s 97 percent of what we are given by the media. Each night on the news it’s a bad story, a shocking story, a depressing story, an upsetting story, and then that one feel-good piece at the end, almost without fail.

Of course, there are reasons for this. The media traffics in the lurid and the grotesque and the tragic because these are the types of things that “sell,” for lack of a better term. If the stories we received were simply all stories like Batkid, I believe we’d be less inclined to gorge ourselves on so much media. In large doses, it is controversy and drama that what we crave, not inspiration. Just look at the way our politics are covered.

Controversy and drama and tragedy allow us to say at least we’re not that, when we watch the nightly news or read the tabloids or listen to the radio. It seems strange, but it’s really a way for us to feel better about ourselves. Just take a second and listen to your thoughts the next time you read or see a news clip. More than likely, I bet you find yourself saying, we’ll I’m not as vile as that criminal or I’m not as morally bankrupt as that CEO or I’m not as hapless as that politician.

But we really don’t need that to make ourselves feel better. There is no need to constantly compare ourselves to others’ misery to build ourselves up. Hopefully, stories like Batkid teach us that there are other ways to feel good about ourselves, beside using negativity. We can empathize with little Miles and feel his joy. We can feel gratitude that there are still people willing to take off work or put down their busy schedules just to make the day of a little boy whose existence wasn’t even recognized by those same people a few days ago.

Now, please don’t misinterpret this and think that I’m arguing that we should only consume or be given stories like Batkid. I’m not. The other stories are necessary too. What I am arguing for, though, is that we try to change the way we consume and process the other stuff. And maybe by doing that, we’ll start to get more stories like Batkid.

We surely need them.