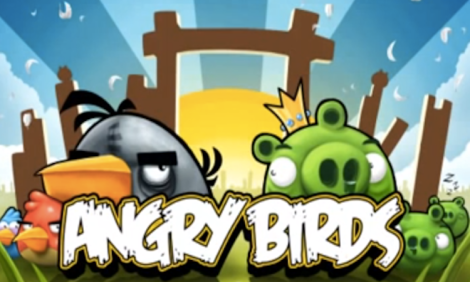 Yes, it’s official. Hollywood is out of ideas. (Screen shot from http://youtu.be/bNNzRyd1xz0)

OK, so the above tagline is not official (yet!), but rejoice! An “Angry Birds” movie is in the works, AKA: Hollywood will always find ways to make money off unwise tweens looking for any movie to go see on a Friday night!

If you are blissfully ignorant, here’s a synopsis: “Angry Birds” is a game you can download on your mobile device. The leader of the birds (you) launches a set of birds from a slingshot on the left side of the screen to knock down green pigs nested in rock and wooden towers on the right side of the screen that someone (the pigs?) built as a defense. It is a game you think you will never play, kind of like “Farmville,” but if you play it once, you will find yourself playing it again and again and in terribly inappropriate places and at terribly inappropriate times — church, the toilet, when your boyfriend is telling you about his bad day, etc.

So, seven years after the initial release of “Angry Birds” in 2009, “Angry Birds” is set to become “a feature film,” you know, just like other feature films such as “Citizen Kane,” “Casablanca,” “Gladiator,” and “The Godfather.” You can expect this movie based on a near-plotless game to arrive in a theater near you in 2016. Reportedly, there will be two directors working on this film, and I really hope that what people say about collaboration producing better ideas is true in this case.

While I admire Rovio Entertainment’s marketing team for working this Bird franchise for all it can produce, I wonder whether this film will remain viable in 2016, even accounting for the impulse ticket purchases by tweens looking for any way to get out of the house. If there’s anything we’ve learned from YouTube, it’s that the millennial population tires of memes as fast as it makes them viral. I know it’s not technically a meme, but frankly I’m surprised that “Angry Birds” is still as profitable as it is after four years of pop culture spotlight.