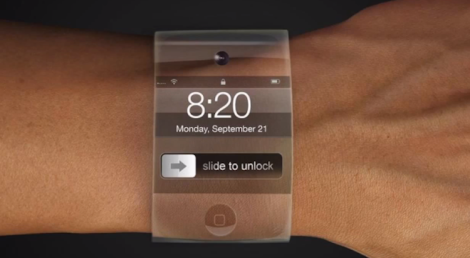 Is this what the new Apple watch will look like? (Screen shot form http://youtu.be/1xKTv1oF5Q0)

There has been talk of an Apple watch to be unveiled very soon today. Samsung has already announced theirs, reportedly for a holiday season release. According to All Things Considered, this watch will be able to record body temperature, heart rate, number of footsteps taken; it will be able to track running routes for athletes, measure blood oxidation, track sleep patterns. It will, in other words, be a computer that becomes something of an extension of the self, in a way that a smartphone cannot, because we don’t strap iPhones to our wrists to measure our pulse.

Unlike a blood pressure cuff, though, the data that the smart watches record can and will be uploaded into the Cloud/Cloud-like storage spaces. And so, as we have all seen this past summer, the government will have even more intimate access to the things that make us human. For those who claim that the government will never try to break into that data because there is no reason to­­, well, they don’t have a reason to look at my phone records either, but that doesn’t stop them.

And even — because I still have faith in my government — even if the government never knows and never cares, it’s still weird. For those who doubt that this will happen, here: An example that it already has. In 2011, activity tracker FitBit “accidentally” posted information online about its users engaging in sexy time.

I am currently training supposed to be training for a half marathon to be held in November, and it would be awesome to have my running times and routes recorded and chronicled, but I can do that myself with a little more effort. While it would be easier to have my wrist computer do it for me, that information is mine. On the surface, I don’t really care right now if people want to know what my temperature is all the time. I would offer that information up gladly, but the principle behind the issue is that some things, some information, belong to me and should be kept private.

I’m not a machine for other, more powerful people to log and then read over when they feel like it. More importantly, I feel, when we surrender autonomy in these small things, we pave the way to surrender it in far more insidious and troubling ways.

Previously from Laura Creel:
♦ Viral Video of the Week: Do the Mashed Potato
♦ What Jimmie Sue and Larry Swilling Taught Us About Marriage
♦ Thoughts on Ariel Castro’s Death
♦ The Other Side of the Desk: Changing Perspectives on Syria
♦ Billy Ray Cyrus: Not as Creepy as We Initially Thought
♦ Bees! Bees! Wonderful Bees!