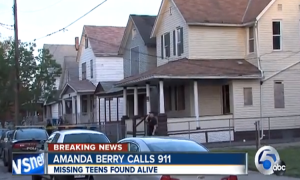 I don’t know what to do with the news that kidnapper, rapist, and murderer Ariel Castro has killed himself in prison. I don’t know how to feel. He did damage to so many lives — irreparable damage of the sort that may never be healed this side of the grave. He was a frightening, perverse, and evil man who deserved death. He did not deserve life.

And yet, while researching some of the details of this case, I happened upon bits of an apparent suicide note penned by Castro in 2004, pleading for help and pleading for death, and in a tiny way, that changed how I saw him. Because somewhere in his sick and disturbed mind, there was a moment of clarity in which he realized, even to a small extent, the hideousness of his actions and desired a change. I am in no way apologizing for the heinous crimes that Castro perpetrated, but I wonder how many lives could have been saved if someone had read that note and taken action. Perhaps the lives of those three women and one child would not have been so harmed; perhaps Castro could have received the psychiatric support he so obviously needed; perhaps the chances for healing would have been greater.

There are many who are glad Castro is dead. Although they have not made statements, there are probably three Cleveland women who are glad he can never come back to haunt them. I cannot say that I am sorry he is dead. But I do wish he had gotten help, even now. I cannot wish otherwise, I think, because I do not and hopefully will not ever know what it feels like to fight insanity, and to beg for help and get none. The small doses I have experienced in fighting desperation have taught me and humbled me enough to know that I should not wish this on anyone. I cannot imagine battling such severe mental illness every single day for decades, as Castro so obviously did.

Some could argue that he should have taken the onus on himself to seek help, but here’s the thing: We’re not really sure what Castro had control over regarding his mental state and subsequent actions. Because as much as we like to forget this when sentencing criminals to death, our actions are often driven by the chemistry in our brains, and sociopaths especially have less brain activity in their frontal lobes (the part of the brain that dictates empathy toward others) than normal people do. Humans are not machines, and so this comparison is not entirely apt, but how much can we blame a machine that malfunctions as a result of faulty wiring?

I did not know Castro, I am not a doctor, and I don’t know what his psychological evaluations looked like. I am not one of his victims. Being none of these, I have little room to comment on this situation at all. Like I said, I am not sorry that he is dead, but I will not rejoice in anyone’s death, even that of Ariel Castro. And for the sake and health of those three young women, I wish this sick, sick man had gotten help decades ago.

Previously from Laura Creel:
♦ The Other Side of the Desk: Changing Perspectives on Syria
♦ Billy Ray Cyrus: Not as Creepy as We Initially Thought
♦ Bees! Bees! Wonderful Bees!
♦ I Wanted That Pretzel Bacon Cheeseburger, but It’s Better This Way
♦ Thigh Gap, or Wasting Time on a Pipedream

One response to “Thoughts on Ariel Castro’s Death”