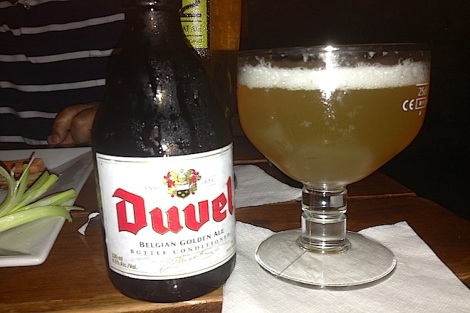 This column reviews a beer based on aroma, appearance, taste and palate (mouthfeel). At the end of each review, we score the beer based on a five-star system (one star meaning you will likely regret ever drinking such a horrible concoction, five stars meaning it’s your new favorite beer, and two, three, and four stars falling somewhere in between).

Duvel Mootgat is a brewery located in Breendonk, Belgium. The brewery was founded back in 1871 and today exports its best-known product, Duvel, a strong golden pale ale, to more than 40 countries. Unlike many of the breweries I’ve reviewed, Duvel only appears to brew three beers: Duvel, Duvel Single, and Duvel Tripel Hop. The name “Duvel” is actually Brabantian, Ghent and Antwerp dialect for “devil,” which the brewers adopted in the 1920s after an avid drinker of their flagship beer noted it was “a real devil.”

Whomever that drinker was, he was right. At 8.5 percent ABV, this beer packs a serious punch. The high alcohol content is a characteristic of the style and, according to Beer Advocate, Duvel is the quintessential example of the Belgian Strong Pale Ale style. If you are so inclined, you can read a nice description about its brewing process here.

Duvel has an interesting smell, as there is a smell of grass from the hops, a bit of floral and citrus, and the faint hint of alcohol hanging around underneath it all. As you can see from the picture above, it pours a pleasant golden straw color. The beer has a rather large head compared to many of the beers I’ve reviewed so far, and its slow to dissipate, leaving some nice lacing as it does.

Although the alcohol is pretty noticeable with the first taste, it becomes more subtle with each sip. It is replaced by a pleasant mixture of fruit and citrus and finishes with a slightly bitter aftertaste. The medium mouthfeel and high carbonation (both typical of the style) provide a refreshing finish.

Overall, it’s hard to complain about a beer like this. Although at first it can be a bit overpowering, its major components eventually even out to produce a well-balanced beer. Even if it’s not my favorite beer ever, there’s a reason that Beer Advocate named it the quintessential Belgian Strong Pale Ale. You’ll enjoy this one.

Little Utopia Rating: Four and a half out of Five