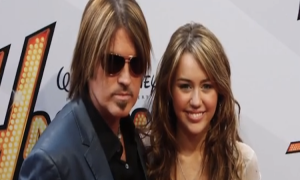 I initially resisted commenting on Sunday night’s VMAs for several reasons. One, anyone who knows me at all already knows what I think about it, and two, writing about it (particularly Miley Cyrus’ infamous performance) adds to the spectacle and allows more space for it, more publicity for and more curiosity directed at something that should not have had any space to be shown in the first place. (And if you don’t know me, then now you, too, know how I feel about it.)  In spite of these reservations, however, here we are.

I didn’t see any of the performances in their entirety, (I haven’t been interested in the VMAs since, I don’t know, I was 15) but I have seen gifs of Miley’s grotesque and perverse act. I was baffled in turn by her father — one-and-done Billy Ray Cyrus — and his Twitter reaction. On Sunday night, he posted something about peace and love in the world and wanting less hate. Of course, most people thought this referred to the Miley haters. And I was troubled by this, because there is no one creepier that you could perform like that on stage for than your father, and I feel like it would have been much better for old Billy Ray to get off his Twitter account and get his daughter into therapy. (More on this later.)

Yesterday, though, he claimed that the tweet was in reference to news from Syria, and so it made a little more sense. When he finally did break his silence explicitly about the performance, he said: “She’s still my little girl and I’m still her dad regardless how this circus we call show business plays out. I love her unconditionally and that will never change.” Although this comment makes Miley seem like an innocent pawn in this “circus we call show business,” instead of the active and conscious participant she was in this spectacle, I am glad to see that Cyrus wants to stand by his daughter.

And some people really need to stand by her, because if I know anything, it’s that someone who does whatever it was Miley did on Sunday night is desperate for any attention s/he can get. At the point where Miley seems to be, even terrible reviews and definite negative attention are better than nothing. And that’s sad, because life can be much fuller and much more contenting if and when we can just settle into our own skin and not parade/objectify ourselves in search of the latest press release. I hope Miley realizes this one day, and I hope that Billy Ray is wise enough to work through it with her.

Previously from Laura Creel:
♦ Bees! Bees! Wonderful Bees!
♦ I Wanted That Pretzel Bacon Cheeseburger, but It’s Better This Way
♦ Thigh Gap, or Wasting Time on a Pipedream
♦ Blessed are the Rich: “Preachers of L.A.”
♦ The Problem With Aaron Hernandez’s Disappearing Act

One response to “Billy Ray Cyrus: Not as Creepy as We Initially Thought”