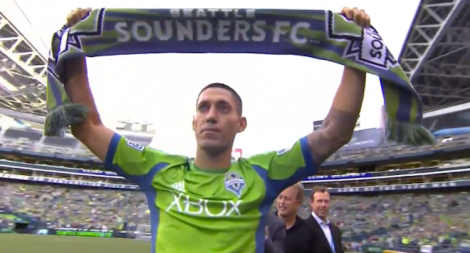 After playing seven seasons in Europe, Clint Dempsey is returning to Major League Soccer, as he is set to join the Seattle Sounders of Major League Soccer. The move from Tottenham Hotspur to Seattle will reportedly cost the Sounders a $9 million transfer fee, which makes it the highest transfer fee ever payed by a MLS team (though Sports Illustrated is reporting that it was actually paid by MLS). Dempsey’s move will set another record as well, as the striker is set to earn $32 million over four seasons, making it the highest base salary ever given to a MLS player.

The transfer came as a surprise both for the American soccer community and the soccer community abroad. Dempsey’s time at Fulham, particularly his final two years, had been a resounding success, as the American broke Fulham’s English Premier League goal-scoring record. Dempsey also set the record for most goals scored by an American in Europe, though it was broken last year by U.S. National teammate Jozy Altidore.

But his time in the Premier League wasn’t perfect by any means, either. After angling for a move away from Fulham because of a desire to play for a Champions League-caliber team, Dempsey was transferred to Tottenham. Although he scored 12 goals during all competitions, he never really seemed to secure the trust of manager André Villas-Boas and some wondered whether he was good enough to play for the Lilywhites. Recently, Tottenham acquired Brazilian midfielder Paulinho and Spanish forward Roberto Soldado, which suggested Dempsey might be once again moved to a lesser team or face the prospect of struggling to get on the pitch for Spurs.

Now that he has returned to MLS, many opinions have been given on how Dempsey’s move will affect his career, his role with the U.S. Men’s National Team, the perception of the MLS, and the future of American soccer in general. Over at ESPN, Jeff Carlisle noted that the move contradicted Dempsey’s career arc and might negatively impact his standing with the USMNT, while also adding that it seemed “like an admission of failure, at least as it relates to his tenure with Spurs.”  However, Carlisle also reasons that Dempsey’s move was both influenced by “family concerns” and the record contract he was being offered. Still, Carlisle clearly views this as a step in the wrong direction as far as Dempsey’s career is concerned.

Meanwhile at SB Nation, Zach Woosley contends that this is an absolutely perfect move for all parties concerned. Whereas Carlisle suggested that the move might harm both Dempsey’s career and standing with the USMNT, Woosley argues that the move to Seattle is the best way for Dempsey to prepare for the 2014 World Cup.

“He has challenged himself, he proved he can play in the Premier League, and now at the age of 30 he knows this will likely be his final World Cup as a starter and making the move to Seattle is a calculated decision. A means to an end.

“Sitting on the bench at Spurs would not have helped Dempsey — other than keeping him healthy and uninjured — but being a starter in Seattle, playing week in and week out, will help keep Dempsey sharp and have him ready to go next summer.”

Woosley’s argument essentially boils down to the fact that he believes the most important thing for Dempsey is to be playing regularly. Even though he strangely suggests that MLS is not a step down from the Premier League because it “produces competitive play” and “starters for the national team,” his important take away is that Dempsey’s overall quality won’t suffer as long as he is playing consistently, something that would not be guaranteed with Tottenham.

In the end, though, neither Carlisle nor Woosley are entirely correct. Dempsey’s move isn’t entirely a step backward or a brilliant step forward. It’s somewhere in the middle. 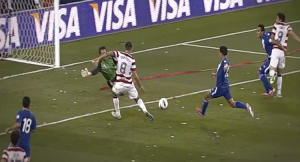 Will Dempsey’s move hurt his standing with the USMNT? (Screen shot from http://youtu.be/ky0tT5uJF0U)

Woosley is correct to suggest that the most important thing for Dempsey as it relates to his stance with the USMNT and the upcoming World Cup is playing time. Yet, as Dempsey showcased during his time at Fulham, he clearly is capable of earning consistent playing time in the Premier League, even if he would be forced to do so at a lesser club. Staying at Tottenham and competing for minutes against better talent could benefit Dempsey as well. The challenge of better competition might force Dempsey to push himself to develop new skills, allowing him to reach a higher level of play that he might not achieve when he is just handed the minutes in Seattle.

In addition, to suggest that MLS isn’t a step down from the Premier League is downright laughable at this point. Sure, MLS is improving with each passing year and the talent in the league is growing, but it’s obvious that there is a clear talent gap between Europe’s top leagues (specifically with its top clubs) and MLS. Someday MLS might close the gap entirely but that day has yet to arrive and most likely will take place after Dempsey’s retirment — if it happens at all.

So, in terms of Dempsey’s role with the USMNT and his career development, Carlisle and Woosley are both right and wrong at the same time. As Carlisle suggests, the move is a step backward for Dempsey because the best case scenario would be to receive consistent playing time in one of the world’s top leagues, even if it meant playing on a lesser team. However, the best case scenario isn’t a guaranteed one. If he were permanently relegated to the bench at Tottenham, which is a possibility, then it doesn’t matter how much talent surrounds him because he needs to receive consistent minutes in order to be fit for the World Cup, just as Woosley contends. Yet, Woosley is wrong to suggest that the demands of playing in MLS are equal to that of playing in one of Europe’s top leagues.

The only clear winner in all of this is MLS and, by extension, American soccer in general. In a move that strangely parallels one made recently by former NHLer Ilya Kovalchuk, Dempsey’s return acts as an endorsement both for the league’s increasing level of play as well as its growing financial clout. After a recent announcement that the league would expand to 24 teams by 2020, Dempsey’s move provides the league with not only a top-flight talent but also a home-grown one to act as the face of the league, just as Kovalchuk’s move accomplished for the Kontinental Hockey League. Dempsey’s return suggests that there might be a time soon where the best American-born players can stay home to play in a league that will rival the best in the world, even if that time isn’t here yet.

Still though, just because it’s good for MLS and American soccer, doesn’t mean it’s good for Dempsey’s level of play. Most likely, it will be great for his career in terms of future earnings through his new contract and future endorsements. Whether or not the move will translate into an improved on-the-field career for Dempsey still remains to be seen.

3 responses to “Bringing It All Back Home: Clint Dempsey Returns to Major League Soccer”