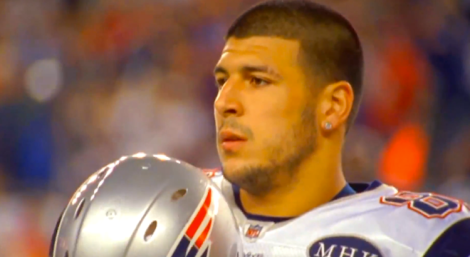 Why are the NFL and the University of Florida pretending Aaron Hernandez never existed? (Screen shot from http://youtu.be/LVty2zJv3GM)

I don’t want to sound all Joe McCarthy here, but is anyone else kind of concerned that the University of Florida and the New England Patriots football franchise are trying to pretend that Aaron Hernandez never existed? Recently, UF, the Patriots, the NFL and many former Hernandez fans have started distancing themselves from the tight end who allegedly killed his acquaintance Odin Lloyd. And by “distancing” I mean: removing plaques with Hernandez’s name on them, collecting and destroying jerseys, removing pictures or images of him in team facilities. In other words, they are acting the same way that Stalin acted in erasing references and photographs of his Communist forerunners Lenin and Trotsky.

Obviously, Stalin’s cover up job during the purges of the 1930s was far more grievous and tragic and had far more ramifications on innocent people than UF taking down pictures of Hernandez. But the parallel seems a little too uncanny and uncomfortable to me. These entities do not want to be associated with Hernandez, which is perfectly understandable. But it is a dangerous, dangerous thing to ignore important facts or associations in an attempt to rewrite history in one’s own favor. Just because UF and New England don’t want to be associated with a man charged with murder, doesn’t mean they weren’t and aren’t associated with a man charged with murder. Trying to cover up that association and brush it under the rug doesn’t mean the association doesn’t exist; it only means that a concerted effort has been very consciously made by powerful men to keep the names of a high-ranking football program and a popular franchise unspotted in the eyes of the world.

Of course, we all rewrite history in some measure. We look more favorably on our own behavior when recounting the story to a friend of a disagreement with a coworker; we tend to look back on experiences when life actually sucked years later through a nostalgic haze. But to later say that a coworker we fought with several months back never existed — well, most people would call that crazy. When Florida and the Patriots pretend that Hernandez didn’t exist in relation to them, they do almost the same thing. But what these parties are doing is not so much delusional as subtle and sly and disingenuous. They know that they cannot outright deny a connection — because people would call them crazy — but what they can do is remove all reminders of it (as far as it depends on them) and slowly erode the association in America’s popular consciousness. Sneaky move, guys.

Furthermore, what makes this move on the part of Florida and the Patriots even more egregious is that Hernandez has not even been convicted of this crime yet. Sure, the evidence does not look promising for Hernandez, but there have been plenty of instances in which evidence presented in a courtroom turns out to be much different than evidence presented in the media (re: Foxy Knoxy, anyone?). Whether or not these parties like it, Hernandez has not stood trial as of this article’s publishing and because they exist in a society that unconventionally, stunningly grants presumption of innocence to the charged, the University of Florida and the New England Patriots should think carefully about too quickly denying their former association with Hernandez. If some spectacular evidence comes out during the trial that unquestionably exonerates him, UF and New England will have tarnished the reputation of an innocent man, and that is truly a tragedy.

Previously from Laura Creel:
♦ President George H.W. Bush Shaves Head, Makes Us All Tear Up
♦ A Summer of Surveillance and Banquet of Consequences
♦ Worse Than the Worst: Flesh-Eating Maggots
♦ On Never Getting to be Tina Fey, and Why That’s Alright
♦ Shared Narrative: An Interview with Melanie Penn and Kelly Jones