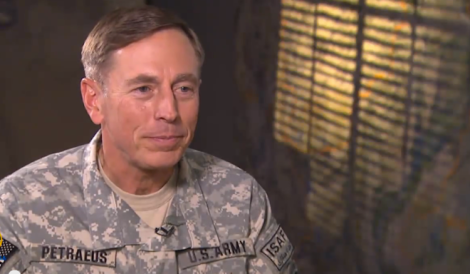 If we could make that David Petraeus money, we’d adjunct permanently too. (Screen shot from http://youtu.be/5_6TkSUNYTo)

Hey, if you’re living nine hipsters deep in a one-room New York apartment like this one, rest assured: The taxes withheld from your paycheck are being put to good use. Your taxes are going toward the publicly-funded City University of New York, where David Petraeus is doing the school a solid and adjuncting a three-credit class for them for the measly pay of $150,000. While most adjuncts earn approximately $3,000 per class taught [and some (like me) earn even less], General Petraeus knows his celebrity status makes him much more valuable than most.

He not only knows it, but he verbalizes it. In an email to Dean Ann Kirschner, quoted by Gawker.com, he says: “The truth is that I could have had gotten [sic] more money or more prestigious places (you won’t believe what USC will pay per week)….”

Turns out, if you’re General Petraeus, resigning because of a highly-publicized extramarital affair isn’t enough to make you want to pump the breaks on your life. No, if you’re David Petraeus, an affair that could potentially have jeopardized our national security by allowing access to email accounts by a mistress without your high level of security clearance isn’t enough to make you want to lie low for a few yearas. What this email excerpt speaks to is that Petraeus remains characterized by a bravado and a greed that convinces him he is more deserving than others to have more — more women and more wealth with less cost and fewer consequences.

Of course, many deans and administrators and coaches and presidents at universities are earning much more than $150,000 a year, but most of these people aren’t adjuncts and most of them are working more than three hours a week with more than 15-20 students. CUNY can pay its employees whatever it wants, and General Petraeus can (apparently) name his asking price, but the whole thing seems distasteful. Hero-worship of any one person is dangerous, but hero-worship directed at someone as slimy as Petraeus? Not cool, CUNY. Not cool.

♦ Let’s Hear It for the Food Trucks!

♦ Recently-Discovered Mayan Civilization Teaches Us Something About Ethics

♦ In What World is This a “Plus-Sized” Woman?