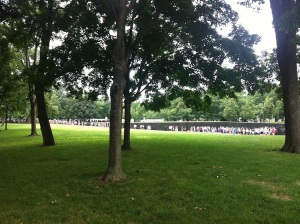 In “Hamlet in Purgatory,” Stephen Greenblatt writes that the line between life and death was far more ambiguous in the medieval and early modern periods than it is for us now in the twenty-first century West. In churches, Greenblatt tells us for example, corpses were placed in the walls and under floors, so wherever parishioners moved, they were always physically close to death. Incense was used to cover up the smell of the dead and decaying bodies that literally surrounded churchgoers. The line between death and life, Greenblatt claims, was much thinner.

But I disagree with Greenblatt. I don’t think that that line is any more final or concrete now than it was then. I think that the boundary between life and death is still just as fine and thin as it ever was, and this is exactly what I experienced visiting the Vietnam Veterans Memorial Wall in Washington, D.C. for the first time this weekend.

I’d never been to D.C. before, and was not particularly fixed on seeing this specific memorial, but I’m certainly glad I did. I saw there something I hope I never forget. There were little snot-nosed kids yelling and not paying attention, on class field trips and on-site learning adventures; there were dads explaining the contents of the Wall to their children; there were girls in their mid-twenties on bachelorette parties walking by a monument on a sightseeing trip (my group), volunteers answering questions, people taking pictures with their phones. So, in other words, people all around were acting exactly as they would at any other place and at any other time.

But there was one group of aging adults, about four men and one woman, who were not acting as they would at any other time. One of the men in particular, who I could tell from his hat was a veteran, was staring up at the wall, wiping away the tears that kept leaking out of his right eye. He wasn’t moving, just staring. Those who accompanied him variously patted his shoulder or laid their arms across his back.

And in that picture that remains etched on my brain and behind my eyes, I was reminded of Greenblatt, and I saw that, indeed, the line between life and death is far narrower than we know.

This is true in several ways. First, the memorial itself offers evidence of this. The granite that rises out of the ground does something different from other war memorials in the U.S. in listing the names of all 58,282 dead. It juxtaposes those names, those identities which no longer exist, with the green grass – symbolizing life and growth and healing – that curls over its edge. And while the boundary is stark, life and death are close to each other in this visual representation.

In another way, death and life come close together with a boundary that is more difficult to spot. That boundary happens in the heart of the man who stood looking at the wall, unable to tear himself away from the names and the horrors of war that inevitably surged up within him.

I don’t know a lot of things, and most of this article relies on speculation, but when I saw that man I knew that a part of him died in that war too, even though he is still physically alive. And I knew instinctively that that part of him lies deep within his heart and in the back of his mind, where linguistic explanations do not penetrate. Only the experience of being so close to death could effect that reaction.  And more than anything at that moment, I wanted to grab him and hold him and cry with him.

We all have those parts of us that are dead: dreams that have died or hurts that have lingered, finally killing those places within us where they lay. May we be slow to forget this in the way we interact with those around us.

Previously from Laura Creel:
♦ This One Goes Out to the Ladies Who Love Men Who Love Sports
♦ Mine Eyes Have Beheld the Monkey-Humans of Ages Past!
♦ Heads Up: Don’t Ask for a Cup of Water on Spirit Airlines. Denied!
♦ Watsky’s “Sloppy Seconds” First on My Playlist
♦ Nikki Sixx is Super Annoying and Takes Himself Waaaay 2 Srsly

2 responses to “Life and Death Come Together in Washington, D.C.”