While in Chicago, I went to the Art Institute and saw that CENTURIES AGO (ca. 1765), Germans (at least) were creating ceramic figures of monkeys dressed as humans playing musical instruments! They were collected by the Institute in a piece called “Monkey Band.” This has been a problem far longer than even I supposed. Be vigilant, friends. 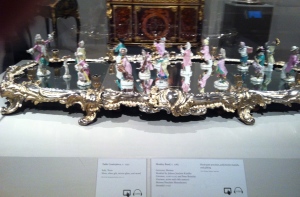 The pictures are poor quality, but above are shots of the whole piece and then a closeup of one “band member.”

Previously from Laura Creel:
♦ Heads Up: Don’t Ask for a Cup of Water on Spirit Airlines. Denied!
♦ Watsky’s “Sloppy Seconds” First on My Playlist
♦ Nikki Sixx is Super Annoying and Takes Himself Waaaay 2 Srsly
♦ What Luhrmann’s Lacks, Fitzgerald’s Struggles Under: The Weightiness of Death in “The Great Gatsby”
♦ Please, Google Glass, I’m Just Not That Cool