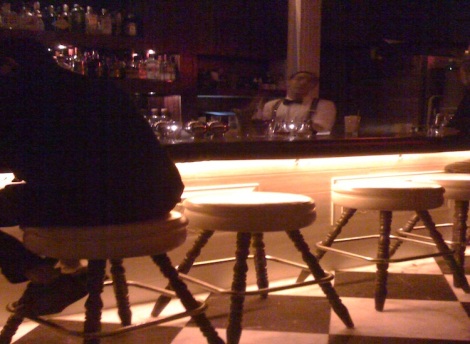 Almost always, it pays to talk to the locals when you’re traveling, whether you’re abroad or right here in the States. Sure, you can stick to the tour bus, but let’s be honest, the tour bus sucks. Get off the tour bus at all costs. If you stay in the herd, you’re likely to miss almost everything worthwhile a great city has to offer. Let me repeat: stray from the sheeple.

Of course, through the internet you can scope out some of a city’s gems before your trip, but there are still some things even the all-knowing internet can’t tell you. That’s where the locals come in. Case in point: On a recent trip to San Diego with my girlfriend, a local was able to tell us about a hidden bar that we never would have found otherwise. Even though I looked online at all the best restaurant and bar lists San Diego allegedly had to offer, none of them mentioned this place. So yes, you can find out about this bar online once you know about it, but you’ll only know about it by talking to a local.

OK, obviously you’re reading about this particular bar on the internet right now and I’m not a San Diego local. Although I’ll go on to describe this bar and how great an experience it was, the takeaway here is that the stuff you discover on your own, often through the help of locals and not the internet, are often the most memorable parts of any trip; they are the moments you will remember years later.  If you only go to the San Diego Zoo — which I did do, just so you know — and/or other major tourist destinations, you won’t have anything unique to take away from your experience. It will only be the same experience everyone else has already had.

Anyway — as my girlfriend was browsing a clothing boutique, I asked the saleswoman what her favorite city restaurants and hangouts were. After asking how long we would be in town for, she mentioned a bar called the Noble Experiment that was hidden inside a popular restaurant. She told us to get in contact with them as soon as possible because, due to its size, it was difficult to get a reservation there.

Little did we know, the process of actually contacting them was half the battle. If you happen to just stumble across the Noble Experiment’s home page, you’d probably have no idea what it was for: a locksmith maybe? There isn’t any information other than a phone number, an email address and a picture of a key. Luckily, though, our local contact had informed us that we needed to text them that we wanted a reservation and they would get back to us. We thought this was a bit quirky, but they texted us back and we reserved a table for the weekend.

We didn’t really know what to expect when we walked into the main restaurant at 10:30 p.m. on a Sunday night. Since the feeling around the Noble Experiment is so secretive, we didn’t want to ask anyone how to get to the speakeasy — like it was a secret that only belonged to us and not to any one else in the public restaurant. We headed toward the back near the bathroom where there appeared to be a wall of kegs. We pushed on the wall — Scooby-Doo style — and found ourselves in front of a hostess’ stand. We were now inside the best kept secret in San Diego.

With its cryptic website, reservation process, and location, the Noble Experiment has a great speakeasy vibe. The interior has low lighting, comfortable seating and fits about 25 people. There aren’t any TVs. One wall is completely lined with gold skulls and the other walls are adorned with funky portraits that change as you sit there. It was unlike any bar that I had ever been to. Though, for obvious reasons, it’s not the same experience as a prohibition-era speakeasy, it gives you a sense of what getting a drink might have been like in those all-too-sober times.

Once we sat down, we were given a menu with about eight drinks on it. We discovered we could also ask for any cocktail off the menu, except for drinks containing vodka (they don’t believe in that spirit there). The bartender that attended to us wore suspenders and an anachronistic mustache, just as you might suspect. He was friendly and filled us in on the story behind the bar and how they got started. Though the cocktails aren’t cheap ($13), they’re unique, enjoyable, and, when combined with the atmosphere, are definitely worth the price.

Looking back, it was definitely one of the coolest things we did in San Diego. We ate some really great food (more on that in the future) and enjoyed some of the area’s natural beauty, but finding the Noble Experiment is something we’ll all remember for a long time.

And no guided tour could have ever led us there.