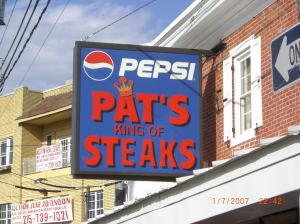 It seems strange now to think that on my first true food pilgrimage I really wasn’t even aware that I was in the midst of one. At the time, the 14 or 15 year-old version of me only considered it a minor detour on the way to a hockey camp I was attending in Pennsylvania. Looking back on it now, though, I see that all the classic food pilgrimage ingredients were there: the anticipation, the hyping of the restaurant, the legendary destination, the if you are in this city you must at least eat this one thing that make a food pilgrimage the bizarre quest that it is.

I was being driven (from South Florida) to this camp along with three other friends by one  of their dads, whom I’ll call Phil. Phil and his son Cameron were originally from the Philadelphia area and were excited not only for the camp or because they would get to see family they hadn’t seen in a while but also because of Pat’s.

Throughout the trip, they continually extolled the deliciousness that is a Pat’s Cheese Steak. For every crummy Waffle House breakfast and McDonald’s lunch we ate (again, at the time I rather enjoyed them), the rest of us were told “just wait, when you eat that first bite at Pat’s it will be the best thing you’ve ever eaten.”

They didn’t stop there, though. In order for it to be a true pilgrimage, we had to understand the significance that Pat’s held, for them and for its other disciples. We had to learn why there wasn’t any place like it, why it was worth this special journey that we were on.

So, they told us about the legend of Pat’s. How Pat’s has a fierce rivalry with Geno’s (Cameron relished telling us about how customers at Pat’s would yell “Geno’s sucks!” from across the street) and the importance of choosing a side early and sticking with it. It was one or the other. This was the first rule of Pat’s.

“Out of the question,” they said.

The second rule of Pat’s was not to screw up the ordering process. When ordering your cheese steak it was important to use the correct terminology. Decide early on whether you wanted onions or not. Whatever you decide do not, under any circumstances, say “with” or “without”. The correct and only acceptable response was “wit” or “wit out.” After ordering your cheese steak from one window, then, you move on to the next one for fries and a drink. Soup Nazi style.

Needless to say, by the time we arrived at Pat’s I was pretty nervous. For the most part, that trip was the first time any of the three of us besides Cameron and Phil had been in a major city. Although I realize now that it just looked like a city, at the time for a kid who had only ever been in the suburbs the South Philly location was intimidating. As we approached Pat’s, Cameron was quick to point out Geno’s to us.

“I told you that place sucks,” he reaffirmed. We all nodded our heads in agreement.

And then there was the sign. The sign that demanded that you order correctly. Phil reminded us to practice as we waited in line. Finally, it was my turn. As I approached the window, I tried to remember everything I had been told.

“How do you want it?” growled a voice behind the counter.

How to order (nightmare128 – photobucket)

What seemed like a lifetime clearly lasted all of five seconds, but I had done it. I wasn’t that rookie that was banished to the end of the line in shame. I ordered fries and a drink and paid for it all at the next window and sat at a table as the rest of the group ordered.

While I was certain that one of them would fail, no one did. Although, one of the guys got a hot dog and we ridiculed him mercilessly for this decision for the rest of the entire trip. We were 14 and 15 after all, even though I think if one of my friends made that decision today the response would be the same.

Looking back on it now, the sign is obviously a joke, from the terrible pseudonym to the tongue in cheek references to being a rookie, not panicking, and borrowing the money you need in line. Most likely, the voice behind the counter didn’t growl at me. But at the time, nothing seemed like a joke.

As we all ate our cheese steaks and fries, we talked about how wonderful it was, how shitty Geno’s was and how stupid our friend was for getting that hot dog (I told you, we weren’t letting that go). Though I remember the food being pretty good, I’ve had much better things since. So why do I still remember this meal and journey so vividly?

The reason it is so unusual for me to think about this trip now, I believe, is because I had always considered that first food pilgrimage to be one of the key components that led a person to go from “just enjoys food” to “foodie” (a word that doesn’t have to be pejorative). Yet, for quite some time I didn’t feel that this trip was that great turning point for me. When it was over, the concept of taking the time out of a trip (and possibly planning an entire trip) around a food destination wasn’t something that appealed to me anymore than it did before. Teenage me was just as content to eat McDonald’s or Taco Bell. In fact, I would have probably been happier to do so than to waste time seeking out a special meal.

What I realize now, though, is that it was a turning point. The pilgrimage to Pat’s is something I look back on years later as laying a foundation for the way I travel and what I like to eat. Whether or not going to Pat’s is really something the locals do or truly was “the best thing I’ve ever eaten” as Phil and Cameron would say, is, in the end, irrelevant.

While I would care about these issues now in my food quests, the life changing part of that first journey was beginning to experience and understand the value that comes from eating a meal with some of your best friends that just might be a once-in-a-lifetime event. No matter how hard I try, I will never be able to recreate those events again, even if I managed to get that same group of people back together and our friend still ate a hotdog there. Yes, the significance was found in the quality of that meal, because even though I’ve now sought out better meals, it was at that time in my life one of the best things I had ever eaten. Because I can still recall those flavors so clearly in my memory, the circumstances of the meal are just as clear because they are triggered whenever I think of those flavors. But, just as importantly, the significance was also found in the build-up, the story telling and the laughter that we shared on that muggy Philadelphia evening.

It was one of those illusive moments in life that you will always remember and something that brings a smile to my face whenever I think about it. It’s a moment that you constantly live your life in search for and because you’re now conscious of what it feels like, when it happens again you’re able to soak it in that much more. It makes you appreciate your friends and loved ones and the life you are living. It teaches you about what’s important in life.

Food does matter and it is important in life precisely because it has this magical power to create life-changing experiences. Nothing else on that trip is as memorable to me as the stop at Pat’s because of the history of the place, the journey to get there, and the food I ate. But because I remember that stop so vividly, I’m able to remember my friends’ faces, laughter and the joy of that night just as vividly. Had we stopped instead at another McDonald’s, the trip just wouldn’t have been as consequential.

So thanks for showing me how it’s done Phil, Cameron and Pat’s.

Previously from Charlie Crespo:
♦ Today, We are All Toronto Maple Leafs Fans
♦ Beertopia: Bell’s Oberon Ale
♦ Luke Donald Won … a Cow?
♦ Viral Video of the Day: Yelp Reviewed
♦ Posterizing: It Can Happen to You

3 responses to “The First Food Pilgrimage”