If you’ve ever seriously followed a sports team, you know the feeling of the stomach-punch loss. As it’s happening you feel helpless. At the end, you’re left speechless.

Toronto Maple Leafs fans are the most recent fan base to suffer the dreaded stomach-punch. Up 4-1 in the third period of Game 7 against the Boston Bruins, the Maple Leafs completely unraveled and lost the game 5-4 in overtime. Bummer.

Still, there are people out there who aren’t emotionally invested in a sports team (oh, to be one of these free souls) and don’t understand this terrible, horrible, no good, very bad feeling. If only there was a way to show these sane people the roller coaster ride of emotion that is the stomach-punch loss. Perhaps a video of some kind?

That’ll do. In order to fully appreciate the meltdown, let’s use these Maple Leafs supporters to look at the various stages of a fan’s attempt to deal with sports-related grief. Imagine now that you are one of them. 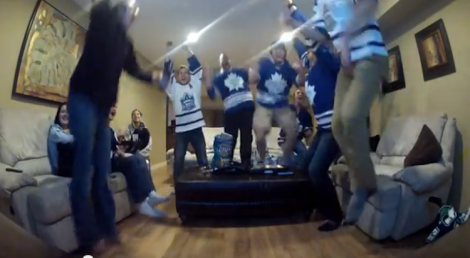 0:31 The Leafs just went up 4-1 and you feel unbridled joy. They have certainly won Game 7 and clinched the series. Hugs ensue.

0:54 Nathan Horton scores for the Bruins to make it 4-2. There are blank stares. Heads are scratched. You say things like, “It’s all good. We got this.” In reality, you start to panic. Your heart beats faster. You try to beat back the ugly thoughts that your team could actually blow this.

0:59 Milan Lucic scores and it’s now 4-3. You cover your mouth and bite your fingernails. Then you adjust your hat, drain your beer and move to the edge of your seat. You are far, far away from the joy you felt at 4-1. Panic is present still, but more so there is just a general emptiness. Not only do you fully realize that your team can completely screw this up, you now expect them to do so.

1:31 Patrice Bergeron has just scored to tie the game at 4 with 51 second left. You bury your face in your hands. It’s almost unbearable to watch the other team celebrate. You say, “Are you kidding me?” over and over while others scream obscenities. Anger is beginning to bubble up inside you. You wonder why you place so much time and energy into something so silly. Still, you hold out hope that your team might be able to come back from the brink, even though you know deep down it’s not happening.

2:01 Bergeron scores again to win it for the Bruins. You knew this was coming, but you still stare at the TV blankly. Some people leave the room. No one says much. 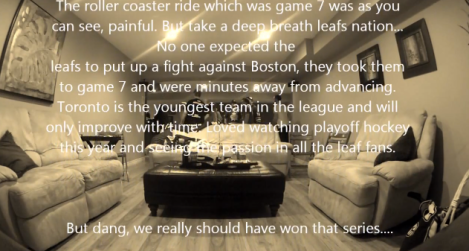 2:39 Everyone has now left the room. Some try to make small talk, others sob uncontrollably into their beers. You try to say things like, “We have one of the youngest teams in the league” and “No one expected us to make it this far this year,” but these sentiments ring hollow. They are things losers say and you know it. You seriously consider quitting sports for a while. Maybe you’ll start building bird houses. Yeah, bird houses will be nice. This lasts until the summer. You’ve completed 5/8ths of a bird house. You start thinking about training camp coming up. You realize that building bird houses sucks. This year will be different you say out loud to the birds. This year will be different.