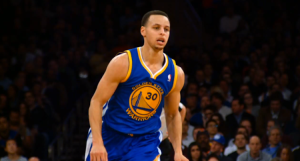 Steph Curry has been on a tear in the first round. How long can the Warriors ride his hot hand?

Just one game into the 2013 NBA Playoffs the Golden State Warriors looked like they were in trouble. The trouble didn’t stem from how they were playing, the Warriors were giving the Denver Nuggets all they could handle on Denver’s home court (a place where the Nuggets had only lost three games the entire regular season). Rather, as Golden State would find out after the game, the Warriors had lost starting power forward David Lee for the rest of the playoffs, which presented a considerable problem to a team that relies heavily on him.

Although Lee is the one of the worst interior defenders in the entire NBA, the veteran provided something that the Warriors other big men simply can’t reproduce: variety in the pick and roll offense. Lee has the unique ability to read the play in front of him and choose the best option, whether that is looking for his own shot, passing to an open teammate, or driving to the rim. Without Lee, it seemed as if the Warriors would lose a key component to their offense, making it that much harder to score against an opportunistic Denver defense.

Understandably, much of the talk after the Lee injury centered around who would fill in for the injured power forward. The consensus seemed to be that Carl Landry would take most of Lee’s minutes alongside center Andrew Bogut. There was some hope that Bogut could regain his form prior to a series of injuries he had suffered over the last couple years and replicate some of what Lee does, but, for the most part, it appeared as if the Warriors would have to try to play better defensively to win the series as opposed to trying to outscore Denver.

For the most part, though, that discussion has been rendered irrelevant. Yes, Carl Landry has filled in well and Bogut, especially in Game 4, flashed signs of his old self, but the main reason the injury to Lee has so far proven to be a non-factor is due to the play of Steph Curry.

Only in his fourth year, Curry might be turning into a superstar before our eyes in this first round series. Of course, he has had brilliant games throughout his career and particularly this season (the 54 points at Madison Square Garden comes to mind), but he had yet to prove he could carry a team in the playoffs. Through his first four playoff games, Curry’s points per game, assists and rebounds are all up from his regular season averages. In Game 4, he was borderline unguardable, at one point launching a three and turning to stare at Denver’s bench before it had gone in.

Part of what makes Curry so difficult to guard are the sets coach Mark Jackson has devised to get both Curry and Klay Thompson open shots. Golden State frequently uses “floppy action,” a common NBA play that involves two wings crossing underneath the basket and coming off screens that have been set for them. Curry is a master at shooting on the move, which makes this particular action perfect for the Warriors’ star player. The following clip (put together by Brett Koremenos) shows exactly how difficult this action is to defend when ran with the quick shooting Curry.

Of course, this isn’t the only way that Curry can score. The shooting guard is just as likely to shoot a three in transition or attack the basket on a drive. As the primary ball handler at times, Curry is equally adept at setting up teammates as his increased assist rate shows. Unfortunately for Denver, they haven’t been able to take away any part of Curry’s game, which has them staring at elimination.

Barring an epic collapse, the Warriors will meet the San Antonio Spurs in the second round. Though the Spurs present a stiffer challenge defensively than the Nuggets do, San Antonio doesn’t have a player particularly suited to guarding Curry on the perimeter. The Spurs strategy may end up being to let Curry get his points, while trying to stifle the rest of the Warriors major contributors. This is easier said than done, however, as Curry has shown a penchant for setting up teammates in the Denver series.

Whatever the Spurs decide, this series will likely come down to how well they handle the problems that Curry creates. Although the experts won’t give the Warriors much of a chance should the series occur, Golden State would have a legitimate chance to upset San Antonio if Curry could continue playing at this current level. Whether he can do so, of course, remains to be seen.

If the Denver series has been any indication, though, Curry just might be ready to lead the Warriors on a magical run.

Previously from Charlie Crespo:
♦ You Gotta Fight, for Your Right, to Write… a Memoir!
♦ Beertopia: Three Floyds’ Gumballhead
♦ College Football’s Brilliant Marketing Strategy
♦ Get Your Luddite On
♦ Is Canelo Alvarez Boxing’s Next Superstar?