What should we make over Madonna’s strange row with Malawi?

Last week, a bizarre story came out of Malawi, a small, land-locked country in southeast Africa. According to a number of sources, Madonna was visiting the African nation and had asked to meet with the president. The singer previously adopted two children from Malawi, a son in 2006 and a daughter three years later.

CNN then reported a statement from the government of Malawi which accused Madonna of thinking that the country “‘should have abandoned everything… and rolled out a red carpet and blasted a 21-gun salute in her honor.'” Malawi’s government didn’t stop there either, according to CNN.

“‘Madonna feels that the Malawi government and its leadership should have abandoned everything and attended to her because she believes she is a music star turned benefactor,’ Tusekele Mwanyongo, a government spokesman, said in a statement posted by the nation’s media outlets.

“‘Granted, Madonna is a famed international musician. But that does not impose an injunction of obligation on any government … to give her state treatment. Such treatment, even if she deserved it, is discretionary not obligatory.'”

A separate spokesperson would later go on to accuse her of overstating her contributions to the country, especially in regard to her announcement that she had constructed schools in the country.

Of course, Madonna responded to the government in her own statement:

“‘I’m saddened that Malawi’s President Joyce Banda has chosen to release lies about what we’ve accomplished, my intentions, how I personally conducted myself while visiting Malawi and other untruths.

“‘I have no intentions of being distracted by these ridiculous allegations. I came to Malawi seven years ago with honorable intentions. I returned earlier this month to view the new schools we built. I did not ever ask or demand special treatment at the airport or elsewhere during my visit.'”

It’s hard to know what to make of the strange war of words between one of the world’s most recognizable faces and (seemingly) an entire government. While it is easy to imagine Madonna demanding such treatment, it seems like too easy of an answer to simply decry her insensitivity or lament her attitude of entitlement. There seems to be something bigger going on here.

In The Observer on Saturday, Barbara Ellen wrote a column that argued the Madonna ordeal was less about Madonna or Malawi and more about “our irrational hatred for ‘do-gooding’ celebrities.”

Ellen notes that she understands and “is all for a healthy dose of scepticism [sic]” when it comes to celebrities who often go on these trips in a self-aggrandizing manner. 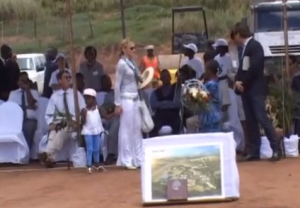 Still, she thinks that “it’s becoming a problem that any time famous people try to help, and behave decently, they are automatically branded as self-serving show offs, whose every effort should be undermined and denigrated, simply because they are celebrities. Sure, this particular situation in Malawi looks to be a mess, but I’d wager it has far more complexities than mere celebrity presence, even one as powerful as Madonna’s. Sometimes it’s too [sic] just too easy to blame the rich western megastar.”

Her point is well taken. Just because some celebrities go into these aid trips with the wrong motives, it becomes problematic if we simply start assuming that every act of charity done by a famous person is only done for publicity.

Still, though, Ellen’s own viewpoint is precarious. Yes, it is troubling that celebrities (allegedly) desire to be treated as minor deities when visiting the third world on charitable missions and, yes, it is often too easy to blame and scoff at the rich Western megastar. But the problem with all these views is that we have made it about us, i.e., the Western world, and once again have found a way to marginalize those not included in that group.

Instead of Madonna’s visit leading to a discussion about a developing nation’s improving infrastructure and what still needs to be done in order to improve a people’s standard of living, we make the discussion about us. We only ask the same questions we always ask: What does Madonna’s visit say about other Western celebrity aid missions? What does the way we respond to showy displays of charity like Madonna’s say about our culture?

It’s not that these questions are entirely worthless. It’s that we’ve asked them so many times already that we can practically recite the answers in our sleep. What are we really doing by asking these trite questions? Well, what is the refrain you hear in all of them?

The discussion about Malawi and Madonna has become a way for the Western world to keep talking about itself.

As the BBC’s Andrew Harding points out, Malawi’s “indignant tone catches something of the frustrations of a continent weary of expressing gratitude, and increasingly determined to meet the outside world as partners rather than supplicants.

“The ‘Madonna Incident’ points towards a more general shift — already in progress — away from the top-down aid of past decades and towards a new focus on policy development, partnership and business.”

Things are changing in Africa. At times these changes might be painful and slow and full of strife, but the hope is that they are changing for the better.

Yet if the Western world continues to view Africa as nothing more than a charitable cause, that’s all it will ever get to be.  Of course, this is tricky and complex because places like Malawi still need charity. It’s just not all they need. They need to be viewed as partners and equals, which, as Harding points out, seems to be beginning to take place. Though, from all the reports I’ve read, it must be occurring somewhere other than in the media.

Celebrity trips that resemble the Madonna Incident do a disservice to the Western world, then, not because they always represent us poorly (though some undeniably do) but because they bring us back to the same tired, fruitless discussions about ourselves. They keep us from considering how to view the non-Western world as a partner, instead of as a charitable cause. By turning the mirror back toward us, we can’t see the possibilities beyond what we already know.

Of course, celebrities aren’t the only ones to blame for this. We are all responsible for the way we think about the non-West and what topics we choose to devote our time to.

If we’re being honest with ourselves, Madonna isn’t embarrassing us.

By continuing to entertain the actions of celebrities and the discussions they lead to, instead of the valuable conversations within arm’s reach, we are only embarrassing ourselves.