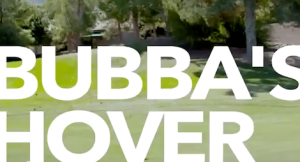 Bubba Watson has a hovercraft? Sounds like a snoozefest.

Whether it’s another advancement in TV, autonomous cars, or any other Jetsons-esque development that comes out almost every day, technology is advancing at such a rate that it becomes hard to keep up with. Because of this, I become less and less awed by technology. That’s right, I’m jaded because of stuff like this.

So, no, it didn’t shock me when I found out through a YouTube video that last year’s Masters winner Bubba Watson was playing a round of golf in a hovercraft, designed by Neoteric Hovercraft and sponsored by Oakley.

While the video was originally just a stunt by viral marketing company Thinkmodo, it got so many views and so much publicity that Neoteric Hovercraft President Chris Fitzgerald has decided to begin manufacturing the vehicles and to make them available for purchase to the public.

“He’s kind of a celebrity now because of it,” Thinkmodo’s Michael Krivicka told Yahoo News. “Millionaires from Russia are calling him, placing orders.”

Millionaires in Russia, you say?

Wake me up when you start teleporting from the 17th fairway to the green, Bubba Watson.