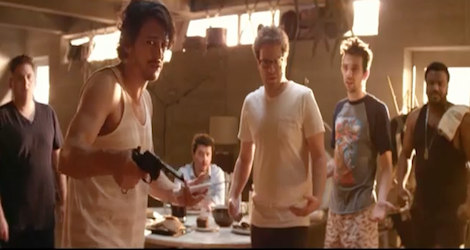 “This is the End”

“This is the End” is a movie so jam-packed full of stars (all playing themselves by the way) that it’s hard to say, “Nah, I think I’ll skip this one”, when you first hear about it. Here’s a list of only some of the actors featured in the movie: Seth Rogen, James Franco, Michael Cera, Jonah Hill, Danny McBride, Emma Watson, and Mindy Kaling.

Add in the horror-comedy theme of the movie, which features all of these famous people trying to survive the apocalypse (and many of them dying gruesome deaths) and this is a recipe for instant box office success.

Interestingly, the movie is an expansion of a short film called “Jay and Seth vs. The Apocalypse,” created by Seth Rogen and Jay Baruchel about two friends trapped in an apartment at the end of the world. The result is that they don’t fear the end of the world as much as they just get sick of being around each other really, really quickly. You can watch that trailer here.

It’s hard to tell from the “This is the End” trailer if the movie is going to be incredible or downright awful. The trailer features some unbelievable lines, including “Is it bad?” from Michael Cera after he has been speared through his midsection by a telephone pole and “Hermione just stole all of our shit” from Danny McBride after Emma Watson robs all of the supplies from the group holed up in Franco’s house. Yet, we’ve all seen trailers that are hilarious, but contain every good line of the entire movie.

I’m not sure if that will be the case with “This is the End.” What I am sure of, though, is that it has made me strongly consider forking over the $15 to see it in theatres.

5 responses to “How Did “This is the End” Get So Many Famous People in One Movie?”