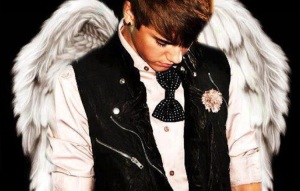 No, Bieber isn’t upset about spitting in that guy’s face. It’s his poor confiscated monkey that’s got him down. (JessicaBieberStyle – photobucket)

Things have not been going so well for teen sensation Justin Bieber lately.

While Bieber has been on tour in Europe, his friends Lil Twist and King Kevi (seriously, that’s what they call themselves) have been squatting at Bieber’s L.A. mansion. The “friends” have been throwing some serious parties complete with women, beer, marijuana and sizzurp, AKA purple drank, AKA lean, AKA purple jelly, AKA Texas tea, AKA… sorry, I got a little carried away there.

Then, on Saturday TMZ reported that Bieber will be prosecuted for allegedly spitting on his neighbor.  The L.A. County Sheriff’s Department will recommend that criminal battery charges be filed against Bieber once the investigation is completed. What went down, you ask?

Well, again according to TMZ, auto mogul Jeff Schwartz (the neighbor) went over to confront Bieber about driving in the community at speeds approaching 100 mph. Let’s just say Bieber doesn’t take too kindly to being told how to drive. Allegedly, he spit in Schwartz’s face and threatened to kill him. We also got this priceless quote from Schwartz’s wife: “He’s a punk. He thinks he’s invincible.” (Side note: I don’t know why, but I love it when older women call youngsters “punks.” When this happens, everything in the world feels right for a little while.)

And now, it appears Bieber has finally hit rock bottom. Apparently, the singer tried to take his newly-acquired pet monkey (really, man? you’re going the pet monkey route?) through the Munich airport, only to have authorities confiscate and quarantine the monkey. The monkey’s whereabouts are unknown at this time. Okay, I’m not entirely sure that last sentence is true, but it sounded dramatic and I can’t believe I’ve spent almost 250 words so far on this nonsense.

Seriously though, when is this guy going to clean up his act? You can’t be hanging around with people that are going on reckless sizzurp binges at parties on a daily basis. You have to start to take control of your life and realize that the hangers-on are taking advantage of you and taking your good nature for granted. You can’t just swag all day every day. If you’re away in Europe, you need to make sure your handler has the proper documentation in order so that you don’t get stranded in a foreign airport.

Wait… what? Oh, no. I wasn’t talking about Bieber in that last paragraph. I couldn’t care less about that guy.

I was talking about the monkey.

That monkey really needs to get his shit together.