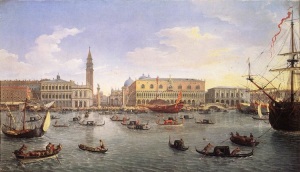 Apparently, the Denver Art Museum has been housing an original Canaletto in its basement for almost a decade. “Housing” might not be the best word for it, though; perhaps “the Denver Art Museum has underestimated an original Canaletto” would be more appropriate. Whatever the semantics, the museum, doubting the painting’s authenticity, left the piece sitting in storage. It wasn’t until curator Timothy Standring ran across the painting during routine inventory, became interested in it and started investigating that anyone thought anything of it. James Squire, the museum’s associate conservator of paintings, then spent about 100 hours cleaning the painting — painstakingly peeling off layer after layer of grime and dirt. The result was a Canaletto original and one that looks like it might be worth millions of dollars.

When I heard about this story, I was immediately intrigued, as were many of the visitors who have seen the now-on display painting. My interest was not that of someone interested in art: Canaletto is good, but he’s no Botticelli for me. No, what really interested me about this are the real-life implications that we can draw from it. And right now, with what seems to be an increasing emphasis on STEM fields in academic circles and an increasing disdain of the humanities (at least by university administrators), art could use some justification by an apologist arguing for its place in contemporary life.

Here is what this story meant to me: very often we look at people the same way that the Denver Art Museum’s curators looked at that old, yellowed, messy and grimy Canaletto-before-it-was-a-Canaletto. The tradition of seeing people as works of art is an old one, dating back at least to the Greek myth of Galatea, making its way through Christian theology and early modern English poetry, and finding modern equivalencies in Wilde’s “The Picture of Dorian Gray” and Shaw’s “Pygmalion.” I’m not doing anything really different when I make this analogy, but even though I’m familiar with this tradition, it never felt quite as poignant as it did today when I heard this story. I was reminded that we often see those people who don’t have all the trappings we admire in our heroes/idols, who don’t suit our preferences for wealth, attractiveness, intelligence or ability, and we write them off as less valuable. And this is sad, because too often we miss out on understanding someone else’s story and person when we stay too interested in what they look like or how much money they make or what skills they have or how we are annoyed that they are not meeting our desire for lively and engaging conversation.

In a sermon given in 1941 to the Oxford University Church of St. Mary the Virgin, C.S. Lewis talks about this. He says: “There are no ordinary people. You have never talked to a mere mortal. Nations, cultures, arts, civilization — these are mortal, and their life is to ours as the life of a gnat. But it is immortals whom we joke with, work with, marry, snub, and exploit…” (“The Weight of Glory” 9). Whether or not you believe in God or salvation or immortality or souls does not matter to the point I am trying to make. Learning to value others — their hearts, minds, feelings and needs — is something that I at least need to learn to do. The mistake made by the Denver Art Museum is one I make every day, and it does an injustice to those whose lives are much more valuable and important than any painting Canaletto (or even Botticelli) ever created.

Previously from Laura Creel:
♦ “Your video sucks, US Magazine”
♦ Jantzen Diving Girl Gets the Skinny on Herself
♦ Letter to My Ex
♦ In Memoriam: The Death of Many Cover Letters, Resumes and Job Applications
♦ Songs of My Mother: Part 1