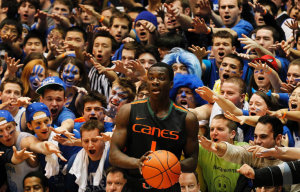 The madness is only growing as the tournament progresses. (whistle55 – photobucket)

If you missed Part 1 of this article where I picked the Midwest and West Regions, click here.

Analysis: Miami has put together an unprecedented season for the school’s basketball program, winning both the ACC regular-season title and ACC tournament for the first time in school history. However, this game got a lot more compelling this week when news broke that senior center Reggie Johnson had surgery to repair a minor meniscus issue and would miss both the Sweet 16 game and the Elite Eight game if Miami advances. It will be interesting to see how coach Jim Larranaga adjusts his rotations without the big man in the middle.

Marquette has advanced to this stage after nail-biting wins over Davidson and Butler. The Golden Eagles looked to Vander Blue in both games to rally the team in the second half. Blue made the game-winning shot against Davidson and dropped 29 points on Butler. Can the junior guard lead Marquette past the Hurricanes?

With Johnson available, Miami would clearly be the favorite. While his absence makes this a much tighter game, the Hurricanes have enough talent to make up for it. At least for this round.

Analysis: Syracuse is known for its stingy 2-3 zone defense and this year has been no exception. The Orange have the third-highest defensive field goal percentage in the nation at 37.3 percent and come in at sixth in three-point percentage allowed at 28.9 percent. If you want to beat Syracuse, you’ll need to shoot well from outside.

Indiana has this ability, with three players in Christian Watford, Jordan Hulls and Victor Oladipo that shoot over 40 percent from three. While the Hoosiers match up well on the offensive end, they will likely struggle defensively. Indiana is undersized and the Orange have NBA size all over the court.

In the end, that size disadvantage will prove to be too much for Indiana to overcome. Syracuse will dominate on the glass, which will give its balanced scoring attack enough possessions to win a close game.

Kansas will have its hands full trying to stop Trey Burke. (JonathanTjark – photobucket)

Analysis: Kansas comes into this game vs. Michigan having won 12 of its last 13 games, but not having shown anything special so far in the tournament. The Jayhawks are led by freshman guard Ben McLemore, the top NBA prospect according to Jeff Goodman, and senior center Jeff Withey. McLemore is only averaging 6.5 points after two games, though, including a particularly dreadful game against North Carolina where he didn’t make a shot from the field. If this scenario repeats itself, Kansas’ won’t beat Michigan.

Meanwhile, Michigan has been playing extremely well so far, destroying South Dakota State and Virginia Commonwealth. The Wolverines rely on the play of Tim Hardaway Jr. and Trey Burke and they have delivered so far, combining for 59 points in Michigan’s first two games.

In the NCAA tournament, guard play is usually the deciding factor in most games. Expect Michigan to ride the shooting of Hardaway Jr. and Burke to the Elite Eight.

Analysis: Florida Gulf Coast has become the tournament darling after consecutive upsets of Georgetown and San Diego State. During those upsets, the Eagles did stuff like this:

Florida Gulf Coast runs an up-tempo system predicated on pick-and-rolls and floor spacing. They shoot a lot of 3s and play smart within their system. Still, the Eagles are a puzzling team. They beat Miami early in the year, but also lost games to Lipscomb (twice), Stetson and Maine.

Florida is just as puzzling if not more so. The Gators sometimes look like the best team in the country but suffer from similar stretches of inconsistent play. They struggle in close games and don’t seem to have a go-to player to make a shot in crunch time. However, even though they beat Minnesota by double digits, Florida was tested in the Third Round and responded well for the first time all season. This early test will benefit the Gators in the long run.

NOBODY outside of Gainesville wants Florida to win this one. Florida Gulf Coast will have all the support in this game, but their dream run will end here. While both teams share similar styles, Florida simply plays it better and has the more talented team. It will be a close contest through the first half, but the Gators will blow it open late.