I had the opportunity to see parts of Claude Monet’s “Haystacks” series about a year ago in Chicago. I was in town primarily to visit some family and search out the surreal Three Little Pigs sandwich from The Silver Palm. I won’t elaborate further on that sandwich anymore here, though, it’s so unbelievably good it would be disrespectful not to give it its own article sometime in the future.

During the trip, I spent a number of hours at the Art Institute of Chicago, wandering about trying to see everything in one day (my advice: don’t even bother to try, it’s impossible). Although I was aware of  Monet and the “Haystacks” series, it wasn’t what I imagined that I’d spend the majority of my time with. At the time, I was most interested in viewing a number of works by the Russian abstract painter Wassily Kandinsky, a favorite of mine whose work I had never seen in person.

Kandinsky’s work was stunning, as were paintings by Francis Bacon (“Figure with Meat”), Henri Matisse (“Interior at Nice”), and Mark Rothko (“Untitled”). Yet, it was Monet and the “Haystacks” that I found myself go back to see a second time and then a third.

On that third trip back to the wing that held Monet, I sat down on a bench and tried to take in the series of paintings hanging on the wall in front of me. There is something oddly captivating about the “Haystacks,” which also include paintings titled “Grainstacks” and “Wheatstacks,” that held me there longer than any of the other pieces in the museum.

Perhaps some background would help explain my fascination. Monet is said to have noticed this subject on a walk near his house and to have initially believed that two canvasses (one for sunny weather and one for overcast weather) would be enough to render the scene as he desired. However, it quickly became apparent that there were simply too many variations in light and time of day and that more canvasses would be needed. So many canvasses, in fact, that Monet needed a helper to cart out all of them in a wheelbarrow so he could choose to work with whichever canvass best suited the current conditions, sometimes working on over 10 in a single day.

As I sat there that day in front of the “Haystacks,” I couldn’t help but imagine that scene. The artist sitting in a field in the north of France struggling to capture the fleeting conditions of the day as his assistant madly scrambled about trying to make sure he had the right canvass for this instant and then another one five minutes later for a new set of conditions.

We all (okay, I’m generalizing) have this reverential idea of the solemn artist at work, with a furious concentration on the task at hand. But surely, if you had happened to walk by this scene you would have had to laugh or, at the very least, smile. At some point over the period that the “Haystacks” were painted, the assistant must’ve tripped and canvasses must’ve been thrown in every direction as the wheelbarrow turned over. Monet must’ve pointed and laughed.

Alright, so maybe not this exact scene, but certainly scenes like it. The point is that just as much as there was hard work, there had to have been laughter and joy as well. After all, during this time in Monet’s life his work had begun to sell and he had acquired enough money to buy the house at Giverny where he had been living, as well as the surrounding buildings and gardens. 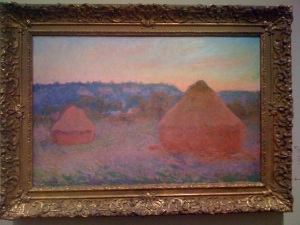 But, back to the “Haystacks.” Let me posit for a second that the “Haystacks” don’t serve any purpose in the paintings other than as a constant subject matter through which Monet could explore what really fascinated him, the ever-changing light (every art snob reading this just exclaimed ‘Duh!’; just give me a minute here, art nerds). Monet was unable to work on a canvass under the exact same conditions because of differences in light emitted from sunrises, the ephemerality of certain effects of light and the way that the haystacks absorbed and reflected lights on different days at different times of year. If the “Haystacks” don’t matter, then (i.e., the painting isn’t about Monet’s ability to render a stack of hay or wheat), what’s really important to take away from the series is that every single day is unique.

As I lost track of time sitting on that bench, I couldn’t help but think about this idea more and more.

No matter how similar some days in our life seem or how boring a string of them might appear to be, there are unique circumstances that occur in each one that we can marvel at, if we only take the time to acknowledge them. Perhaps someone stops to hold a door open for you or you have a random, bizarre conversation with a stranger that makes you laugh. Though these things are often so small, infinitesimally small at times, they are still important enough to be worth our appreciation, just as it is worth appreciating the change in light on a haystack from 5:45 a.m. to 5:48 a.m on a summer morning.

Often, it seems like we have a tendency to remember the big events in our lives: the anniversaries, the weddings, the birthdays. But if you really take the time to think about it, most likely, it’s not the event itself that is memorable. Rather it is a small thing: a taste, a smile, a song that is the real lasting imprint on us. We realize this every time a specific memory is triggered by one of these things, a seemingly inconsequential experience of the minutiae that makes up everyday life. When we realize that our best memories are often based in the small details of the event, we can be more conscious of them as they occur every day.

This is what I thought about that day amongst the “Haystacks.” It’s what comes to my mind at what seems like the most random times. It’s what reminds me to appreciate (what appear to be) the most boring days of my life.

This is the magic of Monet.

6 responses to “The Magic of Monet”