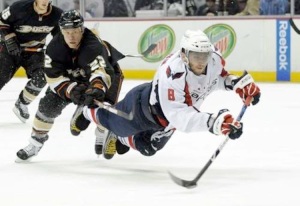 Less than four years ago the major debate of the hockey world centered on one question: Who’s better — Alexander Ovechkin or Sidney Crosby?

At the time, compelling cases could be made for both sides. Crosby, only 21, was already one of the game’s elite all-around players. He finished the 2008-2009 season with 103 points and led the Pittsburgh Penguins to the Stanley Cup Finals where they would go on to defeat the Detroit Red Wings in seven games.

Ovechkin played the game like a train that had come off the rails. He hit everything in sight, finished seemingly every scoring chance, and was a threat to score every time he hit the ice. The Washington Capitals winger bested Crosby in that 08-09 season with 110 points (65 goals!) on his way to winning the Hart Trophy, Lester B. Pearson Award, Art Ross Trophy and Maurice Richard Trophy. However, Crosby got the last laugh as his Penguins defeated Ovechkin and the Caps in seven games in the second round of the playoffs. Still, many believed that Ovechkin would eventually be the greater player.

The next season would see the two superstars score an identical 109 points, making the great debate all the more difficult. However, you don’t hear that question brought up anymore in hockey circles. After the 09-10 season, Crosby would suffer through two injury-plagued seasons, which kept him off the ice for extended periods of time. Ovechkin, meanwhile, just hasn’t been the same player since.

The question surrounding the Captials’ franchise player these days is: What’s wrong with Alex Ovechkin?

Since scoring 109 points, Ovechkin has registered point totals of 85 and 65. This season he has only amassed 31 points in 32 games. While that seems like an impressive amount, projected over a regular 82 game season, Ovechkin would only have 81 points. While 81 points is nothing to scoff at, he scored over 100 points in 4 out of his first 5 years in the NHL.

Perhaps most alarmingly, the winger’s  average time on ice has decreased from a high of 23:06 in 2007-2008 to a low of 19:48 in the 2011-2012 season. While this doesn’t seem like much of a difference, consider that the average shift is only 30 to 45 seconds. With that accounted for, Ovechkin is taking about 4-5 fewer shifts per game, a clear sign that the coaching staff is trusting him less and less, especially during crucial situations.

So far this season, Ovechkin has seen his time on ice begin to increase again to an average of 20:40 under new head coach Adam Oates. The two are said to have a good relationship and the trust Oates is showing in Ovechkin might be a key to the winger returning to form.

The safest place to do so, it seems, is on the ice. Without insider knowledge as to the personal thoughts and motivations of Ovechkin, it’s hard to speculate on the personal issues that could be contributing to this lengthy funk. One possible answer that appears to have been looked over by the theorists is that this current group of Capitals simply isn’t as talented as teams that Ovechkin has played on in the past.

Perhaps this answer has been overlooked because it is considered too simplistic. Since the 07-08 season, the pundits have penciled in the Caps to win the Southeast Division every season, largely believing that the team hasn’t changed all that much and is still a contender to win the Stanley Cup. But a quick roster examination tells a different story altogether.

In that 07-08 season, the Caps still had Sergei Fedorov, Viktor Kozlov and Tomas Flesichmann. Sure, Fedorov and Kozlov were nearing the end of their careers, but they combined for 74 points and 14 during the playoff run. Fleischmann, only 24 at the time, has since blossomed into a first line mainstay for the Florida Panthers.

The Caps simply don’t have this type of talent around Ovechkin anymore. Looking at the top six forwards, only three truly qualify for that title: Ovechkin, Mike Ribeiro and Nicklas Backstrom. The other three consist of Troy Brouwer, a player that has never scored more than 40 points and Jason Chimera and Joel Ward. Both Ward and Chimera are solid players but are more in the mold of a grinder than a player fit for top six minutes. Clearly, then, some of Ovechkin’s issues can be attributed to the fact that he is playing on a much weaker team than he has in the past.

But putting the blame solely on Ovechkin’s teammates is too easy; he certainly deserves his fair share. If you’ve watched number 8 play recently, then you’ve noticed he has stopped doing the little things that make a great hockey player. Instead of stopping in front of the net and looking for garbage goals (the kind that usually break players out of slumps), Ovechkin seems content to let his momentum carry him around the goal and away from the prime scoring areas. The player that used to shoot from anywhere has disappeared; Ovechkin now takes less shots, which, obviously, will lead to less goals.

The league has also adjusted to his trademark moves. The cutback move, where he speeds down the wing and suddenly jumps back toward the middle of the ice, has been taken away by teams using an added winger or center to prevent it. His speed and quick burst, once so deadly, have slowed. As the league has adjusted to him, it doesn’t appear that Ovechkin has put in the work to add different facets to his game.

Even with all his struggles, Ovechkin still managed 38 goals last year, a career year for most players. The Capitals made it to the second round of the playoffs last year and were a game away from advancing to the Eastern Conference Finals. During the lockout, he seemed to be regaining his old form as he posted 40 points in 31 games with Dynamo Moscow in the KHL.

But for Ovechkin, 38 goals is lackluster for a player that consistently scored 50 over a five year span. The Capitals captain was supposed to be challenging for the Stanley Cup every year, not getting knocked out in the second round. The KHL stint was fool’s gold, the talent level just isn’t the same as the NHL.

While every great player goes through a slump, none seem to suffer through one as prolonged as this. At age 27, Ovechkin is still in the prime of his career, even though all the statistics suggest otherwise. There is no reason a player of his caliber shouldn’t be able to turn it around.

It seems that he might just be on the verge of doing so.

Until we know for sure, though, the question the hockey world debates will remain the same: what is wrong with Alex Ovechkin?